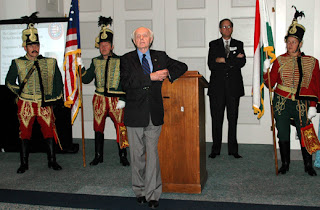 Who can fail to be moved by these lines?

I appreciate our readers' puzzlement. Why is she quoting Laurence Binyon's words? This is not Remembrance Day.

No, indeed, but those are the words that come to mind whenever I hear of the death of some very fine person, especially of that generation that fought the twin evils of the twentieth century.

No it is not Roy Scheider of whom I speak but of Congressman Tom Lantos, whose death has just been announced.

Tom Lantos was born in Hungary 80 years ago and, as a Jew, was a predestined victim when the Hungarian Holocaust was unleashed in March 1944. He escaped from Nazi labour camps twice and, it seems, joined the anti-Nazi underground. Information like that always bothers me a little because so little is known about that underground. Still, Mr Lantos says that he was part of it and part of an anti-Communist student organization.

Lantos was one of those protected by the great hero of the Second World War, Raoul Wallenberg and went to the United States on an academic scholarship in 1947. He remained in the country, becoming Representative from northern California in 1981.

Unlike some other escapees from Nazis, Lantos did not become a Communist or a pacifist. He had understood that evil had to be fought. He showed gratitude to his saviour, Wallenberg, to whom the United States granted honorary posthumous citizenship as a result of legislation introduced by Rep. Lantos.

He showed gratitude to the country that had welcomed him after the war. When announcing his forthcoming resignation from Congress at the beginning of this year he said:

It is only in the United States that a penniless survivor of the Holocaust and a fighter in the anti-Nazi underground could have received an education, raised a family and had the privilege of serving the last three decades of his life as a member of Congress.

He remained committed to the real notion of human rights and was one of the co-sponsors of the legislation that finally resulted in a memorial to the victims of Communism in Washington DC. It was unveiled by President Bush on June 12, last year, anniversary of President Reagan's famous speech in which he called on President Gorbachev to "tear down this wall".

A great man and one we shall miss. In particular, the Democrats will miss him - there are not many of his kind left on that side of the political spectrum.
Posted by Helen at 19:36

Email ThisBlogThis!Share to TwitterShare to FacebookShare to Pinterest
Labels: obituaries