The real news from Afghanistan 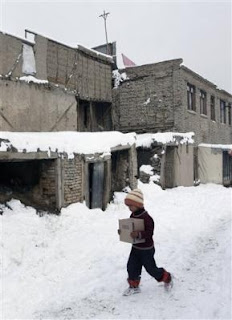 Published by Russian news site is the news of an unfolding humanitarian disaster in … Afghanistan.

While the world’s media is besotted with the story of 2nd Lt. Harry Wales spending ten weeks in the south of the country (2,391 articles posted on Google News so far), to the north and west, around 1,300 people have died as a result of the freezing weather. Furthermore, this weather continues to cause havoc, with heavy snow and sub-zero temperatures hitting 17 of the country's 34 provinces.

For Afghanistan, as elsewhere, this winter is the coldest in the last 30 years. Temperatures have reached lows of -30 degrees Centigrade (-22 Fahrenheit). Some northern regions have been without food and medical supplies for over two months.

On February 20, the death toll since the cold struck in December had risen to over 1,100 with around 200 dying in the past week and hundreds losing their limbs from severe frostbite. More than half of the casualties have been reported in the western province of Herat, but with so many regions cut off it is hard to get a true picture of the devastation.

Local authorities in some of the most remote provinces say they have received no aid from the government.

There has also been devastation in the livestock industry. The agriculture ministry is reporting that over 316,000 cattle have died. Many farmers have been left with no fodder to feed their animals and are being forced to sell their livestock at rock-bottom prices.

People in Afghanistan's northern provinces, stricken with hunger and cold, have apparently even taken to selling their children to buy food and fuel. At least six cases have been reported in the Baghlan province.

Aid workers have also reported being attacked by starving Afghan mountain dwellers and the pain is by no means over. Local meteorologists are saying that over half of the country would be hit by severe flooding when the snow began melting.

And now, back to London where the BBC continues to take a close interest in weather conditions. It tells us we have had the sunniest February on record with, in many areas, the daffodils coming out early.

Please, somebody, tell me that the media has got its news values right!