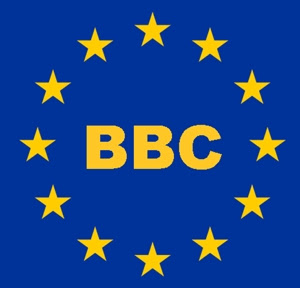 The letters column of The Daily Telegraph has been running a batch of contributions in which readers offer their favourite oxymorons. Looking at a copy of a letter from the "BBC Trust", it occurs that this too should be included in the list.

The BBC letter refers to a decision of the "Editorial Standards Committee of the BBC Trustees" (supposedly) published at 11am today on an adjudication about a complaint of bias in its EU coverage submitted by Lord Pearson of Rannoch.

Eventually, the report will be published here but, since the last entries are for November 2007, you may have to wait some time.

Anyhow, the accompanying letter is signed by Richard Tait, chairman of the committee, and encompasses "one of their most detailed examinations of this area of coverage". Already, it has been condemned as "rather predictably a whitewash."

Says David Keighley, who carried out the original work by Minoatur Media Tracking for Lord Pearson and Global Britain, which led to the complaint: "It confirms in stark relief that the BBC don't have a hope in hell of mounting properly robust coverage of EU affairs, both because they don’t give a damn and because they don’t think the EU itself is important."

The committee itself investigated a very detailed analysis of EU material on the Today programme between September and December 2006, during the build-up to the 2006 European Council meeting. 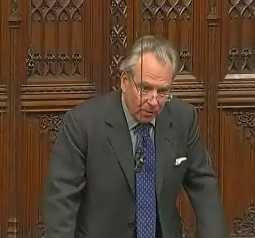 Among the points made in Lord Pearson's complaint were that the Today programme, despite its claims to bring comprehensive coverage of the news agenda, virtually ignored the meeting with no feature reports or interviews at all and only two very brief bulletin items. This, argued Lord Pearson, was in contravention of the corporation's public service obligations to bring impartial reporting of important events.

This was says Pearson, a vital "summit" (as these events are wrongly called in the media) in that the Finnish prime minister, Matti Taneli Vanhanen, announced that member states agreed that "treaty reform was needed" and the EU "cannot throw out the entire text and start from scratch."

The German chancellor, Angela Merkel vowed to make the revival of the Constitution a key issue in her forthcoming presidency of the EU. The next day, Spain and Luxembourg announced a joint initiative to try to recover the idea of an EU Constitution, announcing that a summit would be held in Madrid in January 2007, incorporating those member states that had already ratified the document.

The meeting also exposed a split between those countries opposed to further EU enlargement, especially regardng Turkey, and those supporting it. Those against further expansion won an important concession, with the approval of a more stringent application process, stronger scrutiny of reforms, and a new test on whether current member states could "absorb" prospective newcomers.

In addition, the meeting confirmed the end of the system of the six-month rotating presidency, first established by the European Economic Community in 1958. It was replaced by a new arrangement in which countries would ‘triple share’ the presidency over a period of one and a half years, starting with Germany, Portugal and Slovenia. The stated aim of this new system was to enable new member states to hold a presidency sooner, and to allow the old member states to ‘pass on their experience’ through the system of co-presidency.

This measure had initially been a provision of the Constitution, and after the decision by French and Dutch voters not to ratify the treaty, many commentators assumed the six month rotating presidency would continue. However, in 2006 the European Council established the eighteen-month programme into its Rules and Procedures, and enabling the ‘triple share’ system to come into effect.

The outcomes reached at the summit, together with the change to the presidency system, although ignored by the BBC, were widely reported across other media outlets. An online search undertaken on the Saturday following the meeting found in excess of 450 individual news articles from across the world focusing on the declarations made on enlargement and the Constitution.

However, the BBC ruling on the complaint completely side-stepped Pearson's claim that the Today programme's lack of coverage amounted to "bias by omission" because the programme's editors tacitly assumed they were unimportant. The ruling made no effort to engage with the hard evidence presented, and instead dismissed the complaint on the sole opinion of European Editor Mark Mardell that the meeting was not important because there was no last-minute break down, name-calling or bitterness.

This amounts to a gross dereliction of duty by the Trustees and underlines that the Corporation – despite swallowing £3.1bn a year in licence fees – has no intention of keeping the British public properly informed about the EU project.

The same report that was the subject of the complaint also noted that during three months and 84 editions of the programme, there were only four programme guests who could be counted as "withdrawalist". Only one of the contributions dealt directly with the withdrawal theme. That, too, was judged to by the Standards Committee to be balanced reporting.

One does admire Pearson's solitary attempts to bring the BBC to book, and the response from the BBC is not at all surprising. The first rule of any bureaucracy – and that is the BBC personified - is that it can never be wrong. And we know this applies to the BBC because it keeps telling us that.