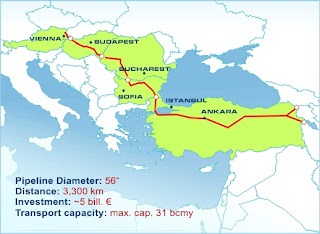 This blog has pointed out on numerous occasions, for instance here and here that Western Europe is in danger of becoming completely dependent on Russian gas for energy. The way things are going in that country and given President (soon to be Prime Minister and Chairman of Gazprom) Putin’s tendency to use gas supplies to bully his nearest neighbours, this may not be the smartest of political moves.

Furthermore, there is the question of the former Communist states, now members of the EU. In their opinion, being left out of various agreements to supply gas directly to Germany and other countries, by-passing the Baltic States and Poland, is not quite the common energy policy they would like to see.

We hear a lot about the need for the EU to speak with one voice in order to sound stronger on the international stage but we see no evidence of this in the negotiations with Russia over energy.

There has been a new twist in the sorry tale. For some time now there has been talk of the Nabucco pipeline, developed for the EU by a private consortium that was going to diversify gas supplies and undercut the EU’s reliance on Russia. There have been numerous problems in these negotiations to the point when Ferenc Gyurcsány announced that Hungary could not afford to wait and was going to throw her lot in with Russia and Gazprom.

More recently, Hungary has announced that it wanted to support both the South Stream pipeline that Gazprom is patiently putting together and Nabucco.

Romania's Tranzgaz and Turkey's Botas are also partners in the 3,300-kilometre pipeline, which would bring gas from the Caspian region via Turkey to Europe from 2012. The project is led by Austria's OMV AG. South Stream is a potentially conflicting project involving a 10 bln eur pipeline being built by Russian gas giant Gazprom and ENI of Italy.

The trouble is, as we have pointed out before, that Gazprom now has a 50 per cent stake in OMV and President Putin has just signed an agreement with Bulgaria that has brought that country into the South Stream pipeline, which is still largely in the planning stage.

At one level, the South Stream pipeline project is designed to get Russian gas to Europe while bypassing former Soviet transit countries like Ukraine and Belarus.

But more importantly, analysts say it is part of an ongoing Russian effort to stifle the European Union's efforts to diversify its energy supplies and lessen dependence on Moscow. In the process, the Kremlin and Gazprom are using Russia's energy might to establish a strategic foothold in Europe and expand Moscow's influence on the continent.

"This is part of a larger strategy," says Fyodor Lukyanov, editor in chief of the Moscow-based journal "Russia in Global Affairs." "Wherever possible, it is necessary to increase Russia's presence in Europe, either inside the EU or in countries that have a chance to join."

The fear is that this could leave Europe vulnerable to energy blackmail.

In fact, Gazprom’s manoeuvring appears to have been designed to undermine Nabucco and prevent the EU from getting gas supplies in any way except that approved by Russia. A particularly important development was Russia signing an agreement with Kazakhstan and Turkmenistan “to build a pipeline along the Caspian Sea coast to transport their natural gas to Europe -- via Russia.”

It would seem that the effort has been successful. Today comes the news that Nabucco will function only with Gazprom providing a good deal of the gas.

The change in policy also comes as a rival pipeline in development threatens to undermine Nabucco's mission.

"Russian gas will feed into Nabucco," said Reinhard Mitschek, the managing director of Nabucco Gas Pipeline International, which is overseeing the project.

Vasily Astrov, energy expert at the Vienna Institute for International Economic Studies, said, "There are now several competing interests around Nabucco." Astrov added: "In order to get Nabucco launched, the consortium is playing with the idea of cooperating with Gazprom. In that case, the original reason for Nabucco has changed."

Mitschek, who is also director of gas logistics for OMV, the Austrian energy company that is one of the six members of the Nabucco consortium, said he saw no contradiction in involving Gazprom. "Diversification has two angles - diversification of gas sources and diversification of gas transportation routes," he said during an interview. "I can imagine Russian gas being fed into our pipeline."

Yes, I expect he can imagine such a situation. Whether this is quite what the EU’s energy policy was supposed to provide is a moot point.
Posted by Helen at 20:06