How we are governed 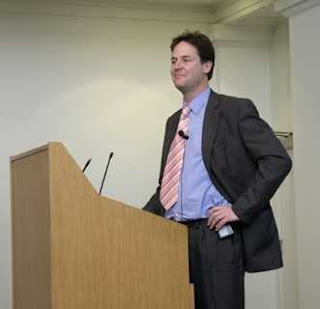 For a politician whose party had committed to a referendum on the EU constitution – and is part of the general conspiracy to pretend that the Lisbon treaty is not the EU constitution by any other name – Nick Clegg's latest foray into the debate can only be regarded as malicious.

His call for an "in-out" referendum has to be simply an attempt to divert attention from the Lib Dims' refusal to honour their manifesto commitment on the treaty referendum. But it also provides an alibi at the next general election. He and his merry men can claim they "supported" the idea of a referendum, without making it clear that this was different from what everyone else was asking for.

On the other hand, we also get the Dims running with the hare and the hounds, their transport spokesman Norman Baker, cited in The Daily Express as condemning the EU "requirement" that cars should be fitted with daylight running lights.

"This European Directive," Baker says, "is not only unnecessary, but dangerous, particularly for motorcyclists, who will lose the advantage they presently have as the only vehicles regularly to use lights in daytime." In full "outrage" mode, he adds, "It will also cause confusion for drivers between rear lights and brake lights ... The last thing we need is road safety compromised by barmy directives from Brussels."

The interesting thing about this – apart from the fact that it was covered by The Sunday Telegraph two weeks ago – is that there does not, as yet, seem to be any directive.

Despite the comments of our own provincial transport minister, who states that, "from early 2011 all new types of passenger cars and light vans will have to be fitted with dedicated daytime running lamps in accordance with the relevant European directive", as far as I can ascertain, the EU has yet to decide whether it is going to legislate on this matter. It is considering whether leave fitting daylight running lights to a "voluntary" agreement with car manufacturers, or introduce regulations.

Furthermore, Baker is obviously unaware – as indeed are most people, including some who should know better – that the genesis of this "law" is not the EU but the United Nations Economic Commission for Europe (UNECE). This, we pointed out those two weeks ago, highlighting also the complexity and the utter lack of transparency of the process by which our laws are now made.

In a further twist to this story, Baker must know that there is absolutely nothing he, as an MP, can do about changing what he condemns as a "barmy" directive. The ironic thing is that, even if we took up the idea that his boss is floating, had an "in-out" referendum and all voted for "out", it would not make a blind bit of difference.

Through an entirely separate treaty structure, in this case the 1949 UN Convention on Road Traffic (as amended), we are obliged to introduce UNECE agreements into our own laws. In this case – and many others – the EU simply acts as the administrative agent which turns the agreement into law, ready for us to implement.

But Baker, like so many, does not have the first idea of how we are governed.