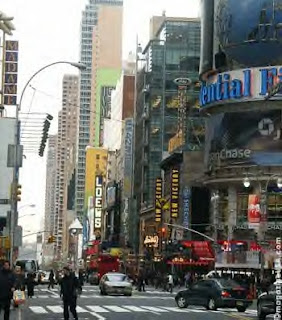 Perhaps I am being a trifle over-sensitive but I cannot help feeling that the Reuters headline "Euros Accepted" signs pop up in New York City is a little bit triumphalist. The story is all about the mighty US dollar being a lot less mighty than it used to be so shops in New York City have started accepting euros and intend to go on to accepting sterling and Canadian dollars.

"We had decided that money is money and we'll take it and just do the exchange whenever we can with our bank," Robert Chu, owner of East Village Wines, told Reuters television.

The increasingly weak U.S. dollar, once considered the king among currencies, has brought waves of European tourists to New York with money to burn and looking to take advantage of hugely favorable exchange rates.

With respect to Reuters economic correspondents I shall wait a while before expressing pity for those unfortunate Americans and jubilation about the euro being so strong. Having a lot of people visiting the country and NYC in particular to spend a lot of money there is hardly a body-blow to its economy.

Conversely, the absence of American tourists, caused by the weakness of the dollar and the corresponding strength of the euro and sterling, as well as the hideously high prices we have to face in many places this side of the Pond, has caused problems in London’s theatres, for instance, and in many places in France and Italy.

The one cheering comment is made by Billy Leroy of Billy’s Antiques and Props. Not only he has decided to take euros, money being money, he is not bothering to exchange them, intending to use them when he goes “back” to Paris. Maybe Mr Leroy could be persuaded to take sterling and come “back” to London as well, to spend his loot.
Posted by Helen at 21:20