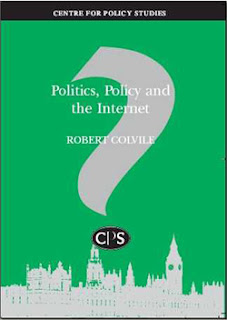 Of all the things we could write about today – and there is such a torrent of news that it is difficult to know where to start – we have chosen, perversely, the publication of a CPS study entitled "Politics, Policy and the Internet", which is also reviewed by its author, Robert Colville, in The Daily Telegraph.

The reason we have decided to expend our limited energies on this publication is because it tackles the vital, long-term of how we receive our information on politics, how we respond to it, and how we interact with the producers of that information.

And, as we have pointed out in our previous piece, reporting on certain issues is becoming so distorted and even hysterical that it is not the facts that are dictating the agenda but the media's perception of them, as viewed through a narrow, partisan prism.

Turning thus to the publication itself, The Telegraph headline tells us more of the content, with the headline, "The web will force politicians to be open", with an intriguing pull-quote which tells us that, "Those who thrive online are the wittiest, or rudest, or most honest".

That, in fact, tells you something about the Telegraph sub-editors as the actual quote in the piece reads, "Those who thrive online are the most informed, or wittiest…" etc. Information, in their eyes, it seems, does not seem to account for much.

Anyhow, Colville (who is himself a Telegraph writer and blogger) has as his thesis the view that, just as television and radio transformed politics in the 20th Century, the internet will similarly transform politics in this Century.

He goes on to write that the internet has already had an effect on politics – particularly in the US – but it is underdeveloped here and, in particular, British political parties have "failed to embrace this new opportunity". The BNP website, Colville tells us (as if we did not already know) has the same market share as all the other major political parties combined.

Colville thinks that the parties could reverse this by altering their mindset from "send" to "receive", opening up their sites to interactive communication, rather than using them as sterile repositories for jargon-laden press releases and the sterile, mind-numbing politician-speak to which we have become accustomed. This, he avers , will bring far greater openness to politics.

Crucially, he believes the internet will be used increasingly to hold politicians to account but it could also re-empower MPs, linking them more directly with the concerns of their constituents. Most, he adds, "have failed to grasp this opportunity".

Colville then goes on to assert that the most powerful and subtle change will be to the public’s mindset. As we grow used to the instant availability of information on-line, we will no longer tolerate delay and obfuscation in getting similar information from government. This leads him to conclude that "the individual, and not the state, will be the master in the digital age".

This, in fact, is a highly optimistic conclusion as Colville has some highly critical things to say about the state of the British blogosphere, which is supposedly leading the charge. Collectively, our traffic is a fraction of that experienced in the States to the extent, he writes, that the blogosphere "has not yet found its voice". Bloggers, he adds, have a long way to go before they displace the MSM.

It is in his section about bloggers that we see the view that, "winning attention online means being the most informed, or amusing – or simply vitriolic". That is slightly different from how it appeared in the newspaper article, but the point is made.

We would agree with it, however phrased, and then take Colville to task on his earlier claim that success is about interactive communication. From his own evidence, the BNP site is the most successful of those produced by political parties, yet that is hardly interactive. Where it succeeds is in being informative.

Within our own political blogosphere, we have much wit, a great deal of amusement, considerable vitriol and some honesty. Where, as with the Telegraph subs, we are lacking is in information. Much of what is produced is shallow and derivative and takes much of what the MSM tells us at face value.

If the blogosphere is to grow up and take its place in the nation's life – as the US shows it can – then it needs perhaps to focus a little more on the information that the MSM is so lamentably unable to bring us. Information, as they say, is power, and only thus armed will the individual, and not the state, be the master. He who provides it - whether politician or blogger (or both) - is the one who will thrive.