Has anybody thought about Scotland? 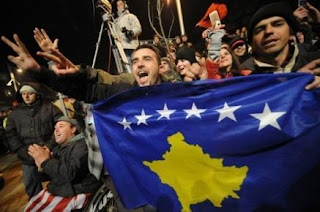 One can only revel in the disarray experienced by the "colleagues" as they struggle to come to terms with the self-proclaimed independence of Kosovo. Continually vaunting its unity, whenever a crisis emerges, the EU somehow always fails to step up to the plate, each nation state adopting its own position until a formula is found to paper over the cracks and give some uneasy semblance of common purpose.

It is also very evident why Spain, as the leading Refusenik is reluctant to sign up to the EU's common position. Despite the assurances from the boy Miliband that the declaration of independence is "unique" and does not create a precedent, Madrid plus the governments of Greece, Romania, Cyprus and Slovakia are all concerned that the move could serve to legitimise the claims of their own separatists.

Certainly, this does create problems for these countries, and it also seems to be giving UN sec-gen Ban Ki-moon some heartache. He has currently declined to say whether he thought Kosovo's independence declaration was legal or not.

On the one hand, there are the Serbs, calling in aid the UN charter and its guarantee of "territorial integrity". Tadic asked the Council: "If you cast a blind eye to this illegal act, who guarantees to you that parts of your countries will not declare independence in the same illegal way?" "Who can guarantee that a blind eye will not be cast to the violation of the charter of the United Nations, which guarantees the sovereignty and integrity of each state, when your country's turn comes up?" he added.

On the other hand, though, Kosova seems entitled to rely on Article 1 of the charter, which guarantees the right to self-determination of "peoples" – not "states" – which seems to create something of a conflict at the heart of the UN.

Those who might care to champion the Serbs' claim might also remember the fate of East Timor which in 1975 made a unilateral declaration of independence. It, however, was recognised by only six countries and was subsequently invaded by Indonesia and incorporated into that state.

Internal violence continued and, in 1999, the administration of East Timor was taken over by the UN in a situation not that dissimilar to that which applied to Kosova. And both these situations have led to the creation of independent countries.

All this leads to an interesting possibility. If Kosova can declare UDI and get EU and then UN recognition, what is to stop the separatists in Scotland seeking to gain their own independence, in the teeth of British (English) opposition? I bet little Miliband didn't think of that when he rushed into recognising Kosova as an independent state.