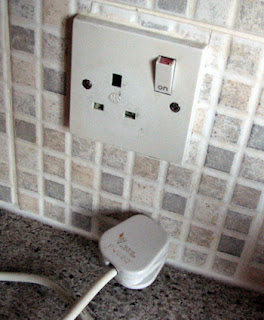 But, as fellow Umbrella blogger Tapestry points out, the official inflation index has been so degraded that it no longer means anything, other than to allow the likes of Gordon Brown to pretend that the problem is by no means as severe as it is.

One could, of course, expect that the David Cameron's opposition party – the one that used to be called the Conservatives – might have something to say about this. On the other hand, the Cameroons have no great incentive to talk up the issue. Acknowledgement of the true rate of inflation would simply unleash a torrent of wage claims that would have the economy teetering on the edge, and drive us even deeper into the mire – a mess that Mr Cameron and his boy chancellor would have to sort out.

To an extent, therefore, there is a conspiracy of silence amongst the political classes, who are happy to make hay on the political margins, but will not address the seriousness of the problems which confront ordinary people. 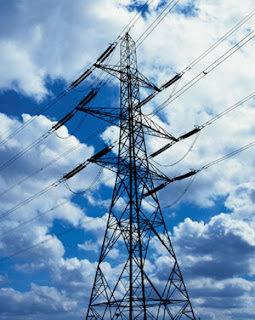 Probably the second of the issues of most concern is energy costs and – in the longer term – energy security. Here again, there is no political recognition that the effect of pursuing the green agenda is one of the main drivers of increased costs, while the reluctance to get to grips with nuclear, and the obsession with windmills, is putting at risk the very fabric of our electricity generation industry.

Again, since both main parties subscribe to the same general view, there is no real discourse on the core issues, and no expectation that a change in administration will lead to any real change in direction. Therefore, this is another thing the politicians simply do not talk about openly, except in the very vaguest of terms – another conspiracy of silence.

Although it has not impinged on the general public, another issue – which will indeed come to the fore – is food supply. In a rich country like ours, the growing shortages in primary commodities will reflect mainly in increased prices. It is the people of the impoverished, under-developed countries that will go hungry, as we buy up available stocks at inflated prices, beyond their reach.

There are, of course, other issues, but there is nothing more fundamental that being able to afford the basic necessities of life, to be able to keep warm and to turn the lights on when it is dark, and to be able to buy food from the shops.

It is these very fundamentals which are most at risk under current policies, which should put them at the top of the political agenda. Yet, they are nowhere to be seen.

For some of us, those who have been through the "winter of discontent", the Heath "three day week" and Thatcher's confrontation with the miners, and who even recall the queues of cars at the petrol pumps in the wake of the Yom Kippur War, these are very real issues. But, it seems, such folk memories do not reach the political classes and there is little sense that the importance of maintaining basic essentials is at all understood.

Instead, while our ill-educated youth drink themselves into oblivion, we get vapid discourse over the meaning of "Britishness", with Jack Straw on the Today programme, apparently in all seriousness, talking about his ideas for a written constitution, presumably with a straight face telling us that this would be underwritten by the "central plank" of the "sovereignty of parliament".

This is at a time through successive EU treaties, and also local administrative measures, this government has done more damage to the sovereignty of parliament than any other, turning this institution into an empty, powerless charade.

Then we also have that fool Miliband prattling about "exporting democracy" to the rest of the world, heedless of the fact that he has spent much of his recent inglorious career helping to destroy the vestiges of democracy in this country – having exported our government to Brussels.

Would that they know it, all these issues are related. For sure, the inflation that we are seeing is the result of global factors – beyond immediate local control, but the mitigation is not.

Wheat prices (and other food commodities) are driving part of the inflationary increases, yet Britain and the rest of Europe are major commodity producers. A foresighted farm policy, which encouraged an increase in production to meet the growing demand would have ensured that we could have been insulated from the worst of the rises.

Yet, until last year, our government was still committed to reducing surplus production and, only latterly, with removal of some set-aside, did it take half-hearted and much delayed action. 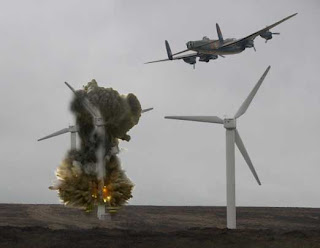 Equally, with the growing energy crisis, our government could have encouraged the rapid introduction of third generation nuclear power, to reduce our dependency on gas and increasingly expensive coal. Instead it has gone down the path of renewables, promoting the expansion of the wind industry when the only sensible thing to do with these monstrosities is illustrated here.

Even in the short-term, the gas used for generating electricity could – with financial incentives which would cost a fraction of those devoted to windmills – have been devoted to transportation, taking the pressure off fuel prices.

All these things and much more, our government could have done – except that our government is in Brussels, unresponsive, with incomplete powers but enough to neuter our provincial government and prevent it taking the necessary action.

As a result, there is that sense of "disconnect" – the great disconnect between our political classes and their hangers-on in the BBC and elsewhere, the sense that the people nominally in power are no longer in control. There is the real world and their world and never the twain shall meet. But, when it comes to suffering the hardships that this disconnect will bring, guess who is in the frame.