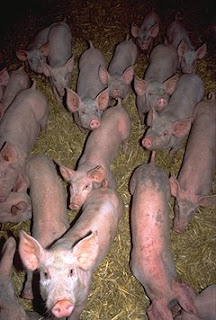 At last, The Daily Telegraph has caught up with the crisis in the UK pig industry – an issue flagged up by The Scotsman on 15 February, when we remarked on the strange lack of interest shown by the general media – and, for that matter, the political blogging community.

True to form though, the Telegraph runs the story in the business rather than in the main news section (although it is flagged up in the "news in brief"), as if this was somehow of matter that was of interest only to the financial community rather than to every one of us.

Most striking of all, however, is that the long(ish) piece focus entirely on the local effects of the crisis. Nowhere do you see any mention of the overweight elephant in the room, the European Union, or any recognition that agricultural policy is an exclusive EU competence. And with such a absence of recognition, no clue is given to readers that the current crises stems – in part - from yet another egregious failure of EU policy.

The proximate cause of the crisis is, of course, the global increase in the price of wheat, which has doubled since last summer, but behind that is a series of errors and miscalculations on the part of the EU that is bringing an important industry to its knees – the Telegraph quite rightly telling us that it could be wiped out.

To understand why all this is happening, though, requires a basic knowledge of agriculture, agricultural economics, world food production patterns, European politics and – above all – the workings of the EU's common agricultural policy (CAP). This is a combination that defeats most writers in a newspaper which (in common with the rest) no longer sees fit to employ a specialist farming correspondent since its last one, David Brown, died prematurely.

Thus, in the hands of the generalists - in the context of the overall "dumbing down" to which newspapers have fallen prey – the emerging crisis merits attention only when it reaches a peak. But, without an ongoing background, the broader issues are far to complex to explain within the space limitations of a single report. The journalists thus resort to simplistic superficialities which do nothing to explain the issues. Even to attempt to do so would be far too complicated.

Returning to the main issue, the global increase in wheat prices – this to a very great extent was (and is) beyond the immediate control of any single agency and, therefore, was to some extent inevitable.

However, even then, that must be qualified. The looming shortage of food commodities has been well flagged up over a number of years and EU member states are substantial wheat producers in their own right, with overall production capable of influencing world prices.

Therein lies the first problem in that EU, driven by the memory of "grain mountains" of the '70s and '80s, and the attendant bad publicity, was committed to a long-term policy of cutting back agricultural production – while actually increasing CAP expenditure – and failed to see the shortfall coming. Thus, at the very time its policy was starting to "succeed" in cutting back production, the world was facing a production shortfall and increasing demand.

Secondly, as we have recorded may times on this blog, the EU allowed itself to be carried away with the idea that "surplus" agricultural capacity could be used to produce ethanol and bio-diesel, thereby adding to the stresses on the world market and driving up commodity prices further.

Then, in the shorter-term, as the global shortage crept up on it, the EU sold off its remaining intervention stocks, leaving the cupboard bare, and was extremely dilatory in reacting to the changing market conditions, only releasing some set-aside for production in this current growing season.

In the middle of all this is the pig industry – and also the poultry industry, milk production and the rest of the livestock sector. Classically, these are low-margin industries which struggle against cheap imports from producers who are not saddled with the same cost burdens - arising in the main from tighter welfare standards and other regulatory burdens. They have survived through ever-increasing productivity and by maintaining high quality.

However, with feed (comprising mainly wheat) accounting to up to sixty percent of their costs, they are uniquely vulnerable to increases in commodity prices. And with there inevitably being a lag in input costs and being able to recover losses through increased prices, the industry cannot cope with sudden, massive increases in their basic costs (which also include rising fuel, labour and regulatory costs).

It is here that the EU – as controllers of our agricultural policy – could have helped. Had it anticipated the rise in commodity prices, the commission could have encouraged production and, at the same time, pulled the early surplus into stock, using the intervention mechanism. It could then have released it selectively to feed producers, stabilising the prices and providing a price buffer to ease the effect of sudden price rises.

This is not so much "subsidy" in the classic sense, but a matter of stock management which, handled correctly, can be cost-neutral. On a rising market, the costs of buying into intervention can be recouped as the commodity prices rise.

But, charged with the management of commodity stocks, the EU failed dismally in this task and then, to make matters worse, creamed off "surplus" funds from the agricultural fund to pay for its vanity project, the Galileo satellite navigation system.

On the other hand, there is of course a valid free market case for leaving the farmers to their fate. Farmers, traditionally, are gamblers, punting on the prices of their harvests when they invest in sowing their crops. In the livestock sector, they can "drop out of pigs" when the pork prices are low and costs are high – as they are doing at the moment – and return when the financial climate is more benign. That has always been the way of farming.

This depends, however, on farmers being able to respond flexibly. In the livestock sector, though, EU-inspired regulatory costs are steadily increasing to the extent that the investments required to return to the market are getting to be prohibitive. Against that, the down-side risks are becoming too great and many who drop out of pig production in this cycle may never return.

For a time – again as is happening at the moment – we can rely on a plentiful supply of cheap imports. Inevitably though, as global commodity price rises feed through the system, the cheap imports will dry up and, without a healthy domestic industry to provide competition, we can be held to ransom by importers who know we have nowhere else to go.

Nevertheless, there is a good argument for letting the market prevail, and there is also an argument that government should take a strategic position, balancing national stocks against demand. In this role, it acts as a stockholder of last resort, to ensure that we are protected from food shortages and rapid price rises.

By contrast, there is no case for a hybrid system, part reliant on the market but with the overall management vested in government – which just happens to be in Brussels – where the management is so poor as to amount to dereliction.

That is the situation we are in, with the consequences that we end up paying twice - in our taxes to maintain the CAP and, as we face shortages and steep price rises, in the shops as well. But, as we count our pennies and more and more of us have to make the decision as to what to cut back in order to meet the mounting food bills, we will never know the true authors of our predicaments. Neither the media nor the politicians are telling us.

Thus are we ruled - "mushroom government" by any other name.