It's not secret – it's confidential 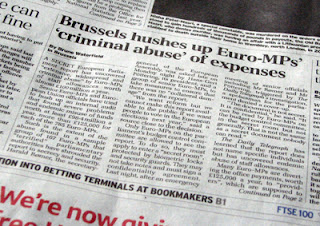 This is the remarkable claim made by a spokesman for the EU parliament about a report of an internal audit of MEP's expenses. According to Bruno Waterfield in today's Telegraph, it has uncovered "extensive, widespread and criminal abuse" by MEPs of staff allowances worth almost £100 million a year.

The story was flagged up by England Expects on Monday and now we learn from Bruno that senior MEPs and EU officials have tried to hush up the report, "terrified" that this might affect the standing of the parliament. "We want reform but we cannot make this report available to the public if we want people to vote in the European elections next year," says a source close to the decision.

Thus, only MEPs on the parliament's budget control committee are allowed to see the report and, to do so, they must apply to enter a "secret room", protected by biometric locks and security guards. They may not take notes and must sign a confidentiality agreement.

Harald Rømer, the secretary-general of the European Assembly, was asked late on Monday night by Hans-Gert Pöttering, its president, and a group of senior Euro-MPs, to take measures to ensure that there was no "collateral damage" from the report and, true to form, they are denying a cover-up. 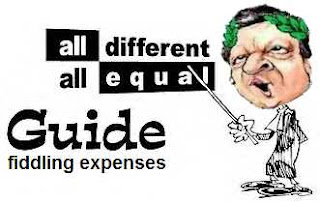 "The document is not secret. It is confidential," says Rømer. "It can be read by Euro-MPs on the budget control committee, in the secret room but not generally. That is not the same as a secret document nobody can read."

However, despite the Telegraph putting the story on its front page – with the BBC doing a low-key follow-up, the parliamentary authorities need have no fears about this achieving anything like the prominence of the Conway affair. So far, Google News lists a mere five stories and, since the report does not name names, and without the soap-opera element of recognisable (to a British audience) names to fuel the story, it will die a death.

This is despite the fact that many MEPs are reported to be diverting their office payments, worth £125,000 a year, to "providers", who are supposed to be accountants, professionals or companies delivering administrative services. In many cases the whole allowance is paid to a single individual or an MEP's member of staff, suspicious payments that are twice as large as the annual £61,820 salary paid to a British MEP.

One source who read the report said: "The abuse is extensive. I felt the police should be reading this. Public finances are being skimmed off and there is every indication this is more widespread than anticipated." The internal auditor found that some Euro MPs claiming the allowance had no employees or just one member of staff. Another source who had also read the report said: "Some service providers simply do not exist. Others are individuals that work for or are dependent on the Euro MP."

Bruno cites Chris Davies, a British Liberal Democrat MEP on the budget control committee, who has complained to the EU's anti-fraud watchdog, OLAF, over the "disgraceful" handling of the report. He wrote to Mr Rømer that the findings "most definitely fall within OLAF's terms of reference", adding: "They are so serious that it should be assumed that criminal proceedings may follow."

We are told that OLAF anti-fraud officials have demanded a copy of the report and have warned that they expect the full co-operation of MEPs and the parliamentary authorities.

Jeffrey Titford, a UK Independence Party Euro MP also on the budget control committee, says: "We were elected to represent the interests of constituents, not to cover up the illegal activities of our colleagues."

In many ways, though, this is hardly news: "MEPs are corrupt – shock" – is one of those "dog bites man" stories that will surprise no one. But, contrasted with the torrent of coverage on the Conway story, the lack of interest in EU affairs only serves to send a signal to this bunch of thieves.

They know that they can continue with their wholesale ransacking to the taxpayers' purse because, frankly, not enough people care enough to make them stop.