Why are they shocked? 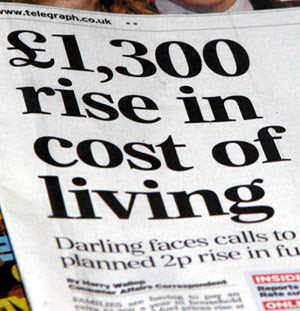 Economists, we are told by The Daily Telegraph are "shocked" by figures released yesterday by the Office of National Statistics (ONS). They showed that the prices paid by firms for wholesale goods such as food and oil increased by 5.7 percent in January, the sharpest increase since August 1991.

In retail terms, as calculated by the paper, these increases translate into retail price rises which have families needing to pay out on average an extra £1,300 a year, mainly on food, energy and fuel, the prices of which are rising at their fastest rate for 17 years.

Add to that, the increases in mortgages and council tax soaring, Mr and Mrs Average are in for a pretty bloody time, and the real economy is due for a knock. This is bound to affect disposable spending, with an inevitable downturn on retail spending on consumer durables and luxuries.

But where the real mystery lies is why economists should be "shocked" – unless this is simply hyperbole on the part of the paper, or it has picked a group of sages that have come from another planet. After all, the runaway inflation in household basics has been well flagged up, not least by The Daily Telegraph itself. 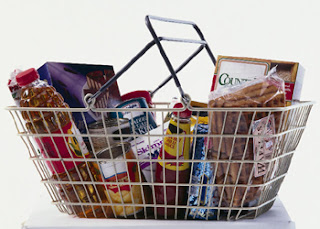 Nevertheless, the "shock" echoes into the business section, where we are told that the, "Markets were shocked …" by the official figures which showed factory gate inflation rising at the fastest rate for more than 16 years and retail prices also soaring, rising at the highest rate for 13 years.

All of this suggests that the analysts ought to get out more often (or perhaps read this blog), as the inflationary trend is now so well established and so obvious that you would have to work with your head in a paper bag not to notice it.

What is worrying though – and has been worrying for some time – is the realisation by these "economists" that the official inflation figures no longer reflect the true cost of most families' escalating bills. The index of consumer prices includes a handful of luxury items which are plummeting in price, especially electrical gadgets, plane tickets, alcohol and some clothes. Thus, while, in real life, inflation is probably well over six percent, the official index show a mere 2.3 percent.

This disconnect we have reported on before, which is not helped by the paper’s insistence on quoting Philip Hammond, the Conservative Treasury spokesman.

Taking a party political line, he says that, "These figures make a mockery of Gordon Brown's boast of low inflation… "Thanks to his economic incompetence, ordinary families are now faced with soaring food and fuel costs. With real take-home pay falling, they will be more squeezed than ever."

Of course, as we discussed earlier, these prices rises are more due to global pressures which do not relate directly to Gordon Brown's economic management, and have as much to do with EU policy and management as they do domestic controls.

Hammond, therefore, is making himself something of a hostage to fortune if he wants to make this a party political issue. The Conservatives have no ready alternatives which will drive down prices, and are supportive of EU policies which are driving up inflation.

As always though, dealing with this issue at a domestic level avoids having to confront the elephant in the room, and admit that many of the problems that ordinary people confront are outside the control of the provincial politicians in Westminster.

However, as inflation continues to soar – and it is only going one way – it will creep up the political agenda as the reality forces its way into the Westminster bubble. But, as the politicians – unable to grasp how much control they have lost – come up with unreal and meaningless solutions and indulge in party-political bickering, this can only add to the growing disillusionment with the political classes.