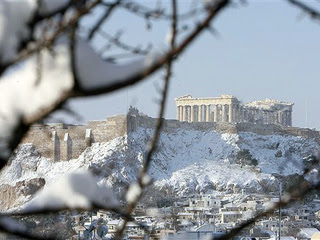 According to Fox News, heavy snowfall left about 200 villages cut off across Greece Monday and forced airport authorities to cancel dozens of flights.

Civil defence authorities were on alert, and problems with power and water supply were reported across the country as Greece was gripped by the second day of a winter storm. Schools and universities were shut throughout the greater Athens area and in many other parts of Greece. About 200 villages, most on the southern island of Crete, were cut off by the heavy snowfall.

Between four to six inches of snow blanketed the centre of Athens, an unusual occurrence in Greece. Near central Athens' snow-covered Acropolis, only cars using snow chains could use the roads.

Email ThisBlogThis!Share to TwitterShare to FacebookShare to Pinterest
Labels: snow