What's going on 'ere then? 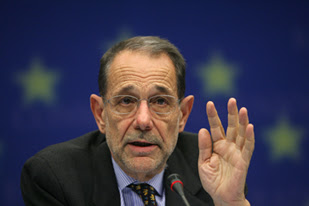 AFP reports (via Aljazeera) that foreign ministers from the European Union and Arab League have begun arriving in Malta for a two-day meeting aimed at fostering "political engagement between the two regions”.

However, this is not a formal EU council meeting as only nine EU countries are represented, including Spain, Italy, Ireland, with Slovenia, the current EU president, co-chairing the talks along with Saudi Arabia and host Malta. Germany, France and the UK sent lower ranking officials rather than ministers.

The putative EU foreign minister, Javier Solana (pictured) is also there and twelve member states of the Arab League are being represented, including the Palestinian Authority, Egypt and Morocco.

We are told that Michael Frendo, Malta's foreign minister, says the meeting is covering inter-cultural dialogue, global warming, energy security, immigration and economic development. But the talks are also expected to encompass the situation in the Palestinian territories and the Middle East peace process as well as the situation in Lebanon.

Slovenia has described the meeting as "a unique and highly opportune event, as dialogue with Arab partners is currently of vital importance in view of the current regional and global challenges in world politics."

A number of points emerge from this. Firstly, since when are the EU and the Arab League cohesive political units – or "regions" - that can entertain meaningful bilateral talks? Secondly, why is the UK not fully represented? Thirdly, what is the status of any agreement reached? And fourthly, since when have "countries" such as Palestine been our "partners"?

Anyhow, since the British media have not reported this meeting, I suppose we can be assured that it is not at all important and we do not need to worry about deals being done behind our backs. As if the EU would do such a thing.