The state of the Empire 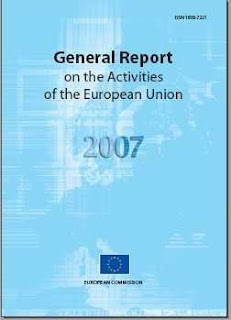 The EU commission has published its "general report" for its activities in 2007 – all 261 pages of it. You will be pleased to learn that it is so short because, "for the sake of readability," the report "concentrates exclusively on the highlights of the past year".

2007 was a year of policy delivery for European citizens – a year of a Europe of results. A new policy era was established with unanimous support by member states for the Commission's ambitious proposals to tackle climate change and energy security.

Historians will no doubt also remember 2007 as the year of the treaties and will trace the long road that has led us over 50 years from the Rome treaties to the Lisbon treaty.

We welcomed the citizens of Bulgaria and Romania into the European Union. The Community institutions designated 2007 as the European Year of Equal Opportunities for All" to highlight one of the fundamental values which the European Union is trying to make a tangible reality for its citizens.

The amazing thing is that they really believe this sort of guff: "Historians will no doubt remember …"! Well, we certainly will – the year we got shafted by the "colleagues".