We are funding this 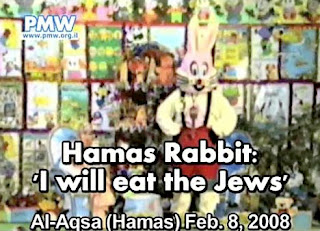 First there was the psychotic mouse, a rather obvious copy of Mickey. His name was Farfur and every week he would spew hatred on a Hamas children’s programme. He and his charmingly pretty co-presenter Sara would encourage Palestinian children to phone in and sing little ditties about bringing death to Jerusalem.

Then, in a rather horrific episode, Farfur was clubbed to death by a thuggish looking Israeli settler. The programme went on with Farfur’s cousin, Nahul the Killer Bee. Can’t help feeling that it might be more useful if those Gazan children learnt some biology. For instance, it might be useful to know that bees and mice are rarely related to each other even in Disney films, never mind real life.

As we have pointed out before, in connection with the rather inane statement made by the Council of European Union after the pointless Annapolis Conference, other children’s programmes on the Hamas Al-Aqsa TV are equally horrifying.

Word reaches me that Nahul the Killer Bee has died because he could not get to the hospital fast enough. The reason? Well, naturally enough, the “Israeli siege of Gaza”. Which hospital was the little fellow trying to get to, I wonder, as a number of Palestinian children and adults are routinely treated in Israeli hospitals. Not an Egyptian one, perchance?

He has been replaced by a homicidal rabbit, whose name is not Rabbit, as that is a nickname given to “a bad person and a coward” (just goes to show how little they know) but Assud, which means lion. I assume the homicidal rabbit is related to the killer bee and the psychotic mouse as he proclaims here to the same pretty little girl that his intention is to kill all Jews and eat them.

It seems that he managed to sneak in from Egypt when the Gazans blew up the border between Gaza and Israel Egypt and rushed in to buy lots of goodies before they were beaten back by the Egyptian police. As we know a suicide bomber then did manage to get into Israel through Egypt.

So there we are dear reader, the indoctrination of those little psychopaths children continues unabated, using electricity provided by Israel and money provided by? Ah yes, very interesting. It seems a good deal of that money is provided by us.

The Taxpayers’ Alliance, an extremely useful and sensible body has recently produced a report on the subject. The report goes through the various ways British and EU taxpayers’ money makes its way to Hamas and comes to the sad conclusion that we contribute in two different ways:

Direct funding from the British government. Britain has donated £15 million to the Temporary International Mechanism, the new financial arrangement designed to bypass Hamas, since it was founded in June 2006. The Department for International Development has also given £3 million to the Palestinian Authority to help pay off the Authority’s debts.

How does this help that loathsome propaganda for children?

Through the new aid spending, part of the £47.5 million donated by Britain is helping to fund hate education and promote violence in the Palestinian territories. It is doing this in three ways:

The report is well worth reading as it gives excellent references and is copiously illustrated with little tots totting very big guns; textbooks that extol suicide/homicide bombing and murder of other children; as well as pictures of the psychotic mouse and the killer bee. Presumably, the report was completed before the homicidal rabbit made his appearance.

I do not agree with all the conclusions. Well, actually, there is one particular conclusion I do not agree with. There is no possible method whereby aid given to the Palestinian Authority could influence that body of men could contribute to peace and stability in the region. As I recall, Hamas campaigned on being less corrupt and more efficient than Fatah. Well, let them prove it all to the people of Gaza.
Posted by Helen at 18:04