Does nobody care any more? 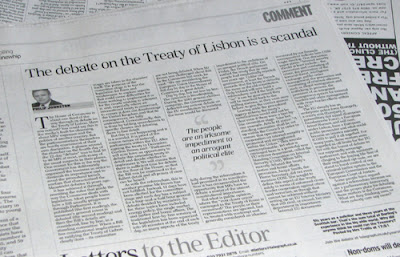 This is the plaintive cry from Philip Johnston in today's Daily Telegraph concluding a piece headed, "MPs' debate on EU treaty is a scandal". "The House of Commons is about one third of the way through its debate on the Treaty of Lisbon," he writes, adding: "Have you noticed?"

In a word, yes! We had noticed and wrote about it yesterday. John Redwood also noted it last week, which we reported.

If you take the "temperature" from the political blogosphere and from the media, though, there is no interest and little concern. Johnston writes that, "You could say this is the media's fault for obsessing about MPs' expenses and the politics of another country." But he adds that the parliamentarians themselves "are hardly enamoured of their own discussion."

That there is no detailed debate on the treaty, he views as "a scandal" and "proof of the supine nature of national parliaments within the EU". Here, he has the measure of the beast – something we picked up in our other piece yesterday.

In legislative terms, the parliament has collectively lost the will to live. It is not longer really interested in its primary functions and has turned in on itself, to the extent that its internal, petty politicking has assumed an overweening importance, to the exclusion of everything else.

Thus does Johnston rail against the creation of "a powerful new EU interior department, called the Standing Committee on Internal Security (COSI)." He devotes some space to home secretary Jacqui Smith's failure to mention it in her speech. He then refers us to details obtained by Bruno Waterfield who in turn links us to the "smoking gun" of the Council conclusions from 2006.

This is, in fact, our old friend the Hague programme, about which we were sounding the alarm in 2004. But, if you asked the average British political blogger about it, they would think you were referring to young William's last television appearance.

So it is that, as Johnston warns, "we are about to hand control of our criminal justice system to the European Commission and the European Court of Justice," leading him to his despairing cry.

Nevertheless, he has hit upon the root of the problem – nobody does care or, at least, not enough people care. Some of those that could make a small difference are happier gurgling away about the US primaries, about MPs expenses, about sharia law and a whole host of issues other than the way we are governed and the destruction of our parliamentary system.

Soon enough, they will have to care and, although it is never too late, the longer we leave it, the harder it will be to restore our democracy and the greater will be the pain. In the meantime, scandal it is, but one which will not get the attention it deserves.