Please, could we have a new scriptwriter? 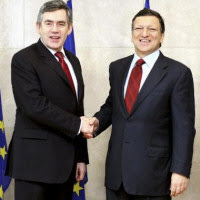 Now that the Hollywood scriptwriters’ strike over there is likely to be a glut of them on the market. Could one or more be persuaded to come over and produce something new by way or prime ministerial utterances about the European Union?

It is completely unbelievable that even someone as bovine as our present Prime Minister could have said after meeting Commission President Barroso something like this:

It is by standing together we can be a force for stability and justice throughout the world. We should not put at risk the trade, businesses and jobs that flow from our position at the heart of Europe.

Yes, dear readers, he really did say it. He really talked about Britain being “at the heart of Europe”. I didn’t think I should ever hear that venerable phrase again. How it takes me back to those halcyon days of John Major when only the Conservatives seemed to talk rubbish about the EU. The Lib-Dims just naturally talk rubbish about everything, especially about rubbish.

According to the man we must think of as our Prime Minister (not that it amounts to much these days) the institutional debate is over for the next decade. Boy, is he in for a surprise when the colleagues will start discussing the next treaty.

With the institutional debate over for the next decade we must focus on the issues that really matter to our citizens - prosperity and jobs, security and climate change.

He clearly has no idea what matters to people, climate change not being a big issue, especially as that warming seems to have turned to cooling; he has no understanding of the relationship between the EU institutions and its economic structures; he has not even read the Constitutional Reform Lisbon Treaty that lays down all sort of rules as to how the economies of the member states are to be run in the near future.

Above all, he is an utter, crushing, bull-headed bore. He has learnt nothing and has not been able to forget anything as he knows so very little.
Posted by Helen at 18:25