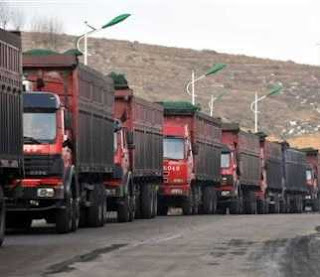 No, not oil but coal. The Wall Street Journal is running a long article on the effects of the Chinese economy on coal prices.

China, says the paper, is doing for coal what it once did for oil: pushing prices to new highs, adding more pressure to the creaking global economy. This emerging economy has long been a huge supplier of coal to itself and the rest of the world. But in the first half of last year, it imported more than it exported for the first time, setting off a near-doubling of most coal prices around the world.

This situation was then made worse by the massive snowstorms in late January, when coal exports were suspended for at least two months. This triggered a further 34 percent increase in Asian prices which has had a knock-on effect in the US and Europe.

For the UK, which imported a record 44 million tons in 2005 this will have a serious long term effect in a global market which is already strained by flooding at major mines in Australia.

Moreover, Australia is having serious problems with overloaded ports while South Africa, having to satisfy it own rising demand, has cut back on exports to Europe. In Russia too, there are problems with a shortage of railway wagons, frustrating attempts to meet growing world demand. 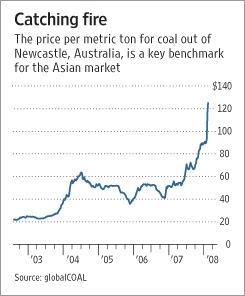 This is not helped by increases in demand elsewhere. One of the world's biggest importers Japan, says WSJ, is burning even more coal since an earthquake damaged a nuclear reactor last year. Longer-term pressure comes from India, which has mounted a major expansion of coal-fired electricity plants that is driving up the country's coal imports despite its large domestic reserves. Indonesia has been moving over the past year or so to divert more of its coal stores to domestic use, as the coal industry there has been depleting its higher-quality coal reserves.

That leaves US coal producers having to increase exports to Europe, as buyers who for years were uninterested in American coal now are scrounging for supply, adds WSJ, noting that some experts are saying that coal prices could remain high or even keep climbing through 2009 or beyond, weighing on the already-slowing world economy.

The paper acknowledges that that some of the factors boosting coal's price are temporary – the snowstorms in China, for instance – but China has also been methodically closing down thousands of unsafe and inefficient coal mines, restricting its supply.

Furthermore, Chinese coal demand grew nearly nine percent last year, raising its share to a quarter of the world's consumption. Its coal industry roughly doubled output from 2001 to 2006, but that growth slowed to about 6 percent last year, not enough to keep pace with demand. Five years ago, China exported 83 million more tons of coal than it took in. Last year, that surplus had fallen to two million. The rapid loss of more than 80 million tons in exports amounts to about 12 percent of the internationally traded market. 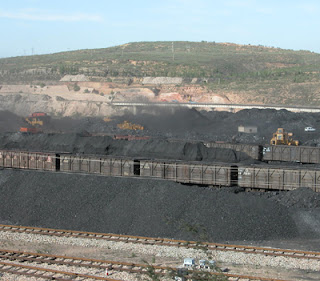 The inevitable conclusion, therefore, it that the factor driving up prices are not likely to change soon, leaving the paper to cite Gerard Burg, minerals and energy economist at National Australia Bank. He predicts that China will become a net importer of 15 million tons, while the International Energy Agency forecasts the gap will continue to widen. Unless China changes its energy mix, the agency predicts, it will be a net importer of 66 million tons of so-called coal equivalent, an energy measurement that equates to 95 million tons.

And just when you thought it could not get worse, the coal shortage in China has rippled through other commodity markets, hurting China's output of steel, copper, zinc and aluminium as electricity is being diverted for domestic industry and household heat and electricity.

China's largest copper producer, Jiangxi Copper Co., shut down some plants, contributing to higher US copper futures. Jim Thompson, editor of Coal & Energy, a daily market newsletter on the coal industry, said if global coal prices remain high, it is possible that utilities in the US and Europe could run low on fuel too.

So much for the WSJ but, all day now, we have been listening to the BBC running the inflation story, lining up a series of pundits to tell us that the "sudden" increases in prices are a short-term phenomenon.

Given the structural changes in the food commodity market, the long-term changes in the oil and gas industry, and now this – coal prices that seem set to go upwards from a record high base - and the BBC's optimism looks more like dangerous complacency. Inflationary pressures are one thing but failure to recognise their effects, leading to a tardy response, is even more dangerous.