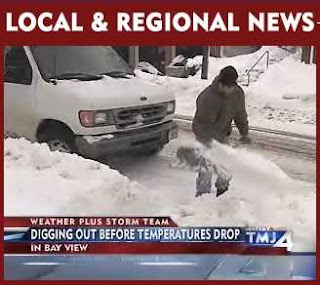 Tucked away now – because it is so common – the news of the global freeze continues to come in, the latest from Milwaukee in the American mid-west, where residents are rushing to finish digging out from this week's snowstorm, before the next batch of snow arrives – expected over the weekend.

So far, the major snowstorm has forced hundreds of schools and businesses to close and grounded hundreds of flights as snow piled more than 20 inches deep in some areas. Governor Jim Doyle called a state of emergency late Wednesday, sending National Guard troops to help about 500 vehicles stuck in a traffic jam behind semitrailer trucks blocking Interstate 90 south of Madison.

Meanwhile, without so much as a mention of global warming, the BBC Radio 4 World Tonight programme reported on the growing humanitarian crisis in Tajikstan which is in the grip of its coldest winter for five decades.

The poorest of the former Soviet Republics, this is a country which normally enjoys a mid-latitude continental climate, with hot summers and mild winters. With a population of seven million, the deteriorating food situation is part of the energy crisis which hit this mountainous nation. The cost of food has tripled in recent months, partially because of rising world prices. Some humanitarian agencies claim Central Asia's poorest nation is heading towards catastrophe.

More details are also coming in of the effects of the prolonged freeze in China, which has killed at least 80 people, destroyed or damaged 800,000 houses and caused economic and agricultural damage valued at 80 billion yuan (about $11 billion), 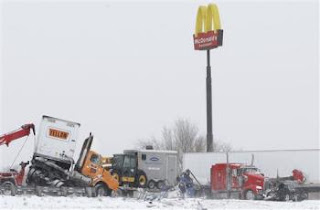 The worst hit parts of the China – the provinces of Anhui, Jiangxi, Hubei, Hunan and Guizhou – include important farming regions where winter crops are now destroyed. The impact on fresh vegetables and on fruit in some places has been catastrophic.

The Ministry of Agriculture has reported the loss of 14.4 million poultry, 870,000 pigs, 450,000 sheep and 85,000 cattle, that either froze to death or died from lack of food and water due to transportation hold-ups. The disaster, now being described as China's "Katrina" has smashed a hole in the government price controls imposed just weeks ago. According to he National Reform and Development Commission the price of vegetables in 36 cities rose by 30 percent between 25-30 January.

Furthermore, the freeze has had a devastating effect on the national power grid, the expansion of which has consistently lagged behind the growth of the economy. Total demand for electricity increased 20.2 percent annually between 2001 and 2007, but installed generating capacity grew by about 18.5 percent a year over the same period.

During the storms, over 2,000 transmission towers [pylons] and a staggering 25,000 miles of power lines collapsed under the weight of ice and snow. China's use of a high-tension power grid as opposed to more expensive underground cables, and its crushing dependence on coal – for 80 percent of its electrical power – left it especially vulnerable to the storms.

In many areas where transmission towers collapsed this was because they were spread too far apart causing them to buckle under the additional weight of thick ice and snow on overhead cables. This is again a result of cost-cutting that is endemic to many construction projects in China. The heavy reliance on coal, apart from its dire environmental effects, also poses huge logistical problems: coal takes up 40 percent of total railway capacity.

Closer to home, Eastern Turkey is also in the grip of freezing weather conditions, which is paralysing life in Eastern Anatolia. A person froze to death in Hizan town of eastern province of Bitlis, flights have been cancelled in Van due to heavy snowfall and, in the provinces of Erzurum and Ardahan, the temperature dropped to -31 degrees Celsius on Thursday night. Roads to 215 villages are still closed to traffic in the region due to heavy snow and blizzards.

Interestingly, in Canada, we are told that, back in 1991 before Al Gore first shouted that the Earth was in the balance, the Danish Meteorological Institute released a study using data that went back centuries that showed that global temperatures closely tracked solar cycles.

To many, those data were convincing. Now, Canadian scientists are seeking additional funding for more and better "eyes" with which to observe our sun, which has a bigger impact on Earth's climate than all the tailpipes and smokestacks on our planet combined. And they're worried about global cooling, not warming.

Given the devastating effects even short periods of intense cold can produce, bringing one country to the edge of a humanitarian crisis, we had better hope these scientists' worries are unfounded. If they are not, the "warmists" are going to have some explaining to do, as they will have been crying "dog", while the wolf is at the back door.