"It will start in Kosovo and end in Kosovo" 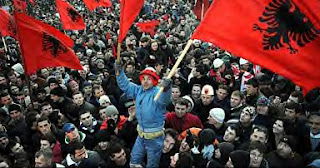 Kosovo’s declaration of independence last Sunday was the least surprising event of this year (though, naturally, there is plenty of time to go for more dog-bites-man-supermodel-takes-drugs stories in 2008). While I am not at all surprised that Serbia and Russia are going through the motions of rage and astonishment I find the silliness and ignorance of commentators in the West – for once, I think, the blogosphere is slightly worse than the MSM – perpetually odd.

When Hashim Thaci was elected to be Prime Minister of Kosovo last November he announced that he would declare his country to be independent as soon as possible after December 10, when the international mediators were supposed to report back to the UN on the progress of negotiations over Kosovo’s status.

The negotiations led nowhere and the UN continued to procrastinate. The election of Boris Tadic, supposedly pro-Western but really little different from his more nationalist rival, as Serbia’s President earlier this month speeded up events. Mr Tadic may want Serbia to be in the EU – promising the Serbs great prosperity through that move – but he, too, was against Kosovan independence. For that matter, no Serb politician at this time is interested in any arrangements with Kosovo apart from some kind of a return to the past, something that was clearly never going to happen. But then Yugoslavia was never going to be turned into Greater Serbia either but it took ten years of war, thousands of dead, tens of thousands displaced and severe economic hardship for the Serbs to accept that.

President Tadic, backed by the Russian government, has gone to the United Nations Security Council asking for the independence to be annulled and Serbia’s “territorial integrity” to be restored.Serbia has also recalled its ambassador from Washington and filed legal charges against Hashim Thaci and the Kosovan leadership in general. Other measures against countries that insist on recognizing Kosovo are being threatened.

The one thing that our readers were missing was a long posting from me on the subject of Kosovo, Serbia, the EU, Russia and related matters. Well, fear no more. It is up on EUReferendum 2 and you can read it. Be warned: it is very long.
Posted by Helen at 20:51