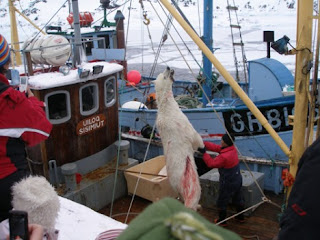 Published in the paper is a picture of a female polar bear, shot and gutted, hung on a trawler's jib, the reason being that, around the Greenland town of Sisimut, starving polar bears are moving into the garbage dump and other areas, foraging for food.

They are starving – according to Svend Erik Hendriksen, a certified weather observer in the Kangerlussuaq Greenland Met Office – because, perversely, there is too much sea ice. As a result, they are unable to hunt for their favourite food, seals, and are forced into human habitations in a desperate search for food.

Losing their natural shyness, they are becoming a threat to the locals who fear they will replace the seals as a convenient Macdonald's snack for the bears. Sadly, such is the danger to children, that the bears are now being shot, the first one on 1 February, hung out in the newspaper photograph.

So much for Al Gore and his Inconvenient Truth, to say nothing of the famous photograph he purloined, his claim being that polar bears were dying due to lack of ice. It really is quite amazing that people such as he should be able to turn the truth completely on its head - and get a Nobel prize into the bargain.