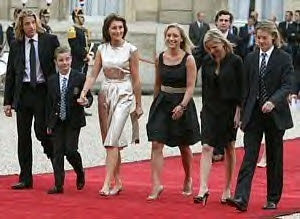 The Sarkozy family seems to be making waves and not all are beneficial to the President of France, who may have hit the ground running but has since then lost momentum. Is that a mixed metaphor? Perhaps. It will have to stand.

It would appear that President Sarkozy’s extensive travels round North Africa and the Middle East have not increased his popularity with the French electorate. In fact, it is sliding, reaching 39 per cent in the latest polls. This is a little on a low side for a leader who has not been in power even a year.

M Sarkozy has been trying to control the situation by pushing forward close colleagues and reliable allies (when not behaving in a seriously hyperactive fashion both on the political and the personal fronts).

One such is David Martinon, the President’s spokesman and carefully selected UMP (Union pour un Mouvement Populaire) candidate for the mayoral position of the Neuilly-sur-Seine, a Paris suburb, considered to be one of the wealthiest communes in France and the place where Sarko himself was mayor between 1983 and 2002.

For some time there have been rumours of Martinon’s lack of popularity – he is an outsider and his close links to the President appear to have harmed rather than helped him. Now M Martinon has withdrawn in the face of an independent right-wing challenge.

The name of the challenger? Jean Sarkozy. Yes, he is a relation. In fact he is the President’s son by his first marriage and he can be seen on the right of the picture above. Though the challenge is independent, it seems highly unlikely that papa knew nothing about it. We shall see whether Sarkozy fils becomes the official candidate in Neuilly or not and what the electorate will think of that.

Happy days are here again (if they ever went away) in French politics.

Meanwhile, while various rumours and counter-rumours circulate in the French media about the President’s private life, David Martinon is supposed to have submitted his resignation as spokesman but the President has refused to accept it.
Posted by Helen at 10:35