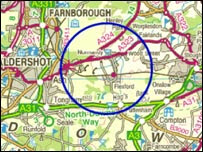 Cattle at a farm in Surrey have been found to be infected with foot-and-mouth disease. Some 60 animals on the farm near Guildford have tested positive for the disease which wreaked havoc in 2001. A 3km protection zone has been put in place around the premises and a UK ban imposed on movement of all livestock.

Gordon Brown has cancelled his holiday in Dorset and taken part in a meeting of the government's Cobra emergency committee by telephone about the issue. Meanwhile, our government – aka the EU commission – has been informed.

Last time it happened, it took a very large chunk out of my life, and I am not sure I could cope again with the stress and trauma that I witnessed then. It was one of the most disgraceful episodes of governmental mismanagement that I have ever witnessed.

We pray that this is an isolated outbreak.

For the latest information, this is the site to watch.