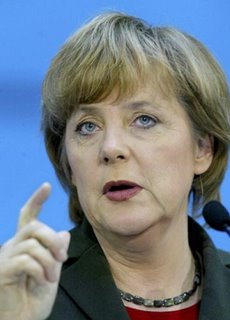 Alas, some attention needs to be paid to other matters going on in the world, particularly in the European Union. For some months the Germans have been rather pleased to have a Chancellor who was not too much of an embarrassment and Angela Merkel’s popularity has remained high, as has that of the Grand Coalition.

It was, however, merely a matter of time before the long-suffering German electorate will start wondering when and how those much discussed reforms will actually take place, whom will they affect and what will be the outcome. In other words, when is Chancellor Merkel going to stop being and international figure and start being a German leader?

“The survey, conducted by the TNS Infratest institute for the weekly news magazine Der Spiegel, showed that around 77 percent were unhappy with the government's work, an increase of 11 percent of unsatisfied citizens from the poll taken two months ago.

The reasons behind the faltering lack of faith in the German administration appears to stem from the increasingly public rifts between the coalition partners, unusually high tax increases and unpopular health insurance reforms.”

“In May, 64 percent of Germans were satisfied with Merkel's work. Sunday's poll put her approval rating at 54 percent. Those unhappy with the chancellor rose to 45 percent from 35 percent in the previous poll.

Merkel enjoyed a sustained early popularity rating due to a round of highly impressive performances on the international stage and a pragmatic approach to domestic governance at home. The dip in approval could be attributed to the overall
performance of her government, the survey suggested.”

It is true that international affairs attract much attention at the moment, particularly the crisis in the Middle East but, then, when is it otherwise? Despite bombastic pronouncements otherwise, however, as we have pointed out repeatedly on this blog, neither the European countries nor the EU will play much of a part in that particular imbroglio.

One reason for this powerlessness (as opposed to soft or sloshy power) is the poor economic performance of the various countries. Possibly, it is time for Chancellor Merkel and her Grand Coalition to address that problem.