All in it together 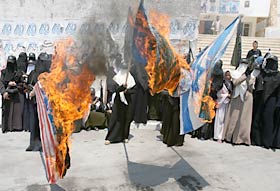 Back in 1917 in Russia, as the country and its war effort were falling apart, the Provisional Government enlisted Mariya Bochkarova (sometimes known as Yashka) to form the Women’s Battalion of Death to show the men how real fighting should be done. This caused a certain amount of merriment, which almost died (“good jokes” never die even if disproved) when the Women’s Battalion together with some of the Junkers (military cadets) showed themselves to be the only ones ready to defend the Winter Palace against the Bolshevik coup.

Bochkarova and others later fought with the White armies (so much of how women fought only with the Reds) and many left the country after the Bolshevik victory.

This little historical vignette came to mind when I read the news item in Ha’aretz, “Newly founded 'Army of Suicide Bombers' marches in Gaza”

The newly founded army of veiled but heavily armed Palestinian women (well, we think they are women, but one cannot quite tell, what with the full jilhab and heavy veiling) was created by the Popular Resistance Committees and its aim is to “protect the Palestinian land” (definition of Palestinian land not given).

“The procession was led by the mother of Abu Yusuf Al-Kuka - a PRC founder assassinated by Israel two months ago. She was carrying an RPG missile launcher on her shoulder.

A spokeswoman for the unit said that the ASB was founded in order "to aid the men in their war against the enemy."”

Aid? Aid? Surely, in the spirit of Bochkarova they should “show” the men how to fight the war.

Still, their first activity was reasonably entertaining – one assumes that if they try to shoot with all that heavy veiling it will be a more serious matter, particularly for the people around them.

In an unprecedented step they also defaced an Arab League flag, which they then proceeded to set ablaze.”

All in it together – all abandoning the Palestinian cause. That is, of course, the news we are getting from all over the world (if not precisely from our own media, particularly the BBC). The Palestinians and Hezbollah are not getting the support of the Arab nations or of the Arab League.

As Youssef Ibrahim wrote in this week’s Business, the Arab League’s message to the Palestinians is: “Dear Brethren, the war with Israel is over”. What can they do in response but burn yet more flags?