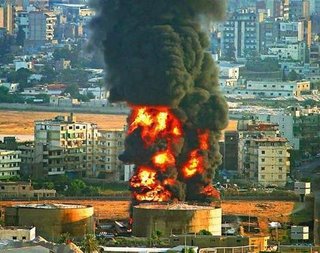 The escalating war in the Middle East, as opposed to the usual state of hostility, punctuated by endless Kassam and the odd Katyusha missiles being lobbed over into Israel by Hamas (though not the official Hamas, which is “upholding the cease-fire”), Hezbollah, Islamic Jihad, Al-Aqsa Martyrs’ Brigade and sundry other trigger happy groups, has forced even the British MSM to turn their mesmerized eyes away from the NatWest bankers and Lord Levy.

Since there has been little reporting in the past about what was really going on along Israel’s borders, most newspapers and electronic media are finding it a little difficult to explain why the Israelis have attacked Gaza and, more to the point, some parts of Lebanon. Must be the IDF wanting to destroy everything in sight. In fact, as Stephen Pollard points out on his blog, that is more or less the line the BBC has been taking, but then you would expect that, would you not.

It is worth following developments through the blogosphere, if for no other reason than speed. Bloggers, particularly those in the area, both Israeli and Lebanese, manage to get up stories that are then spread round the world by other bloggers.

What interests us on this blog, inevitably, is the reaction of that budding power in geopolitics, the European Union. Have we not been told that all these European countries need to unite in order to have a strong voice in the world? The question is, have we or have we not a stronger voice and what is that voice saying?

Well, to start with, France does not see the need for participating in that strong voice being one of the first countries, together with Russia, to criticize Israel’s reaction to the kidnapping of its soldiers, first by Hamas, then by Hezbollah. (A curious attitude on the part of Russia, given her own problems in Chechnya and the Central Asian republics.)

President Bush is attempting to get the G8 conference to speak up with one voice on the subject but that is proving to be impossible, partly because of the French and Russian stance.

Other countries have put in their tuppennyworth:

“Foreign Minister Erkki Tuomioja of Finland, which currently holds the EU presidency, voiced Europeans' fears that the conflict could expand into Syria, which some countries feel may have had a hand in the crisis.

"This is in no way desirable, and the consequences could be truly uncontrollable," Tuomioja said. Russian President Vladimir Putin called on all sides to stand down, while Spanish Prime Minister Jose Luis Rodriguez Zapatero warned Israel it was "making a mistake" to attack Lebanon.

"One thing is defense, which is legitimate, and another is a counteroffensive of widespread attack," Zapatero told Punto Radio. "It won't bring anything other than an escalation of violence."”

Am I the only one to detect a feeling of floundering there? After all, it is admitted (quite openly, too, in the case of President Chirac) that Syria and Iran are fomenting the trouble. Why are there no calls for them to clear out?

Meanwhile, the Canadian Prime Minister, Stephen Harper and the Australian, John Howard, have stated clearly that Israel had a right to defend itself. Well, that’s the Anglosphere making itself heard. Where is Britain?

It is reasonably clear that the terrorist groups, Hezbollah in particular, have decided to stir up as much trouble as possible, to cause a huge conflagration in the Middle East. Another aspect, as Con Coughlin in today’s Daily Telegraph points out, is the need Iran feels for taking away attention from her nuclear ambitions and, probably, mounting internal difficulties.

In Lebanon there is a clear acknowledgement by some politicians that the problem has been caused by Syria through Hezbollah and Israel’s targets remain those connected with that organization. For some the last few days indicate that Hezbollah has over-reached itself and will be the one to be destroyed in the conflagration it caused.

Meanwhile the EU is acting predictably. For reasons that few people can really understand, the High Panjandrum of the CFSP, Javier Solana is going to the Middle East, no doubt to sort all those problems out. Pompously he announced:

“I am in permanent contact with the different parties and with the Secretary General of the United Nations, Kofi Annan. Following these contacts, I envisage going to the region.”

Well, that should do it. However, his reception in Israel may not be all that cordial since the EU has also announced that the Israeli response was disproportionate. To which the Israeli Prime Minister, Ehud Olmert replied:

“What exactly is the criterion by which one measures the proportion of more than a thousand missiles shot at innocent civilians against the measures that were taken by the State of Israel in the last few days? Can one measure the anxiety, the fear, the shocks, the lack of security of tens of thousands of people living day-in and day-out for almost a year under the constant threat of missiles shot at them? When was the last time that the European Union condemned this shooting and suggested measures, effective measures to stop it?”

There is a good deal more of interest in Mr Olmert’s replies. Some of them have been transcribed here and they are well worth reading as they sum up the situation better and more pithily than all that weeping and wailing produced by “disproportionate response” brigade.

To add to the geopolitical confusion the UN resolution, vetoed by the Americans, that was to condemn Israel for her “disproportionate response” spoke only of Gaza, not Lebanon.