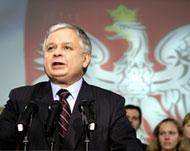 Oh the joys of European harmony. Yet another spat between the Polish President Lech Kaczynsky and a little known German newspaper Die Tageszeitung. The latter, a left-wing rag of small circulation published a somewhat unfunny and definitely unflattering piece on the Polish President.

Apparently, they compared him to a potato and one must assume that there is a history behind that insult, perhaps something along the lines of calling the Irish Spud Murphy in England.

“The offending article in Die Tageszeitung, a small-circulation left-wing newspaper, was entitled "Young Polish Potatoes - Rascals who want to rule the world".

It took a tongue-in-cheek look at the Polish president's alleged dim view of Germany.

The article said Mr Kaczynski often claimed all he knew about his country's neighbour was the spitoon in the toilets of Frankfurt airport.”

Not nice either way but not a patch on what even the mainstream publications (not to mention the BBC) have said about President Bush in most European countries, including Britain. Yet Bush shrugged it all off and went on his round of visits. Other European leaders, such as Tony Blair, get insulted routinely in newspapers in many countries but do not seem to let it affect them too much, particularly if the insults are published in a newspaper few people have heard of.

How different from the home life of the Polish President, or so the media in that country as well as the Civic Platform, the biggest Polish opposition party think. A couple of days after the scurrilous article appeared President Kaczynsky pulled out of a proposed meeting with Chancellor Merkel and President Chirac in Weimar.

Ill-health was cited as reason but the coincidence of timing has been noted, especially as the article was fiercely criticized by Polish government spokesmen, with the foreign minister saying, somewhat inaccurately, that this reminded her of “Nazi-era publications”. Ms Anna Fotyga was born in 1957 but she must have studied history at school. Surely she read what Nazi-era publications were like and who they catered for.

Eight of the lady’s predecessor’s have written an open letter to the President, arguing that his refusal to give the real reason for postponing the meeting shows contempt for Poland’s partners. That, of course, is the argument used whenever the leader of a nation, say the American President, makes a decision that is beneficial to his country. In this case, the benefits are hard to discern.

“We have lost the opportunity to communicate to the biggest countries in Europe and the world our opinion on the big debate concerning energy security.”

Donald Tusk, the party’s President effectively said that the President’s behaviour was silly and peevish – a far greater insult, I should have thought, than being compared to a very useful tuber:

“If it's true that this odious text was behind the meeting being postponed, that would be dramatic.

Imagine how easy it would then be to push Poland towards total isolation. It would be enough to write an odious article about the president.

"We can't base our foreign policy on emotions and complexes.”

The German government insists that relations between the two countries remain perfectly friendly and “marked by trust” but they refused to comment on the article in Die Tageszeitung as a matter of affirmed policy.

Well, it all adds to the gaiety of nations. Have I mentioned how much I am looking forward to Romania entering the EU and bringing the Transylvanian issue with her?