Blair the tranzi (as if we didn't know) 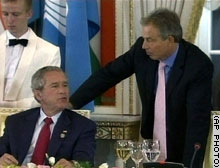 By now most people would have seen some account of the Bush – Blair open mike session and despite the concerted efforts of the British journalists, very little can be made of it, as, indeed, the protagonists realized it almost immediately:

“Asked about the microphone mishap during his final briefing of the summit, Blair quipped that it was "all about transparent government" -- smiling and tapping the microphone in front of him.

Bush "sort of rolled his eyes and laughed" when told the comments had been audible and a copy had been made, said Press Secretary Tony Snow, according to The Associated Press.

"Actually his reaction first was, 'What did it say?' So we showed him the transcript, then he rolled his eyes and laughed."”

There is, as it happens, one particular phrase that caught everybody’s attention and, frankly, it is not all that exciting. President Bush said:

“See the irony is what they need to do is get Syria to get Hezbollah to stop doing this shit and it's over.”

Oh my. Where are my smelling salts? That nasty man used a nasty word about some very nasty people.

Alec Russell, who seems to have decided that being the Daily Telegraph’s Washington correspondent meant being a one man demolition squad to trash Bush and most of America, sniggered in his piece: “It is unclear who "they" are.”

Actually, it is very clear. “They” are the UN and what the President, “who sees the world in simple terms” was responding to is Prime Minister Blair’s fervent support for SecGen Kofi Annan’s suggestion of an international peacekeeping force of several thousand highly trained troops (provenance unspecified) sorting the latest Middle Eastern crisis out.

Perfectly reasonable: UN peacekeeping forces have not actually achieved anything very much at any time and have been part of the problem in many places from Rwanda to Srebrenice. It is quite clear what is behind this explosion of fighting so all they need to do is to get Syria to get Hezbollah … etc.

As usual, what is interesting remains hidden to journalists who just bleat like blessed little baa-lambs: Bush has a simple view of the world; Blair is Bush’s poodle; baa-baa-baa. In fact, Blair is playing his normal game of trying to force Bush to take up the multilateral or, rather, tranzi-led option.

We saw this during the run-up to the Iraqi war when precious weeks were wasted and much good will dissipated in the pointless dragging of issues through the UN. That was done on Blair’s insistence and a very silly idea it was, too.

As Jim Bennett pointed out in his talk about the Anglosphere, Blair’s standing has been very high in Washington, something that could have been turned to good use for Britain. Instead, Blair has squandered it all away by trying to pressurize Bush to do things he neither can nor wants to do: sign up to Kyoto, join the International Criminal Court, submit to UN guidance – all part of the tranzi agenda.