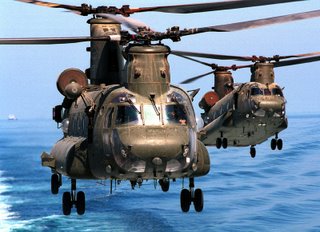 The media's dominant preoccupation remains, quite naturally, the Middle Eastern situation, with headlines focusing particularly on the evacuation of British citizens which is underway.

However, we find earlier stories about the shortage of helicopters for British troops somewhat difficult to reconcile with The Times report that six Sea King helicopters have left the Yeovilton Royal Navy Air Station in Somerset on a marathon journey to Cyprus, where they will be deployed to help in the evacuation.

Additionally, as we now know, the MoD managed to find some Chinook helicopters to carry out the initial evacuations and we learn from the BBC website that no less than five Chinooks are currently providing support to British officials in Beirut. 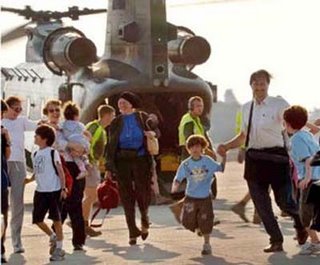 According to Wing Commander Carl Scott, chief of staff of Joint Helicopter Command, one Chinook "flew in [EU foreign policy chief] Javier Solana and took the opportunity to take 40 people out - the ill, the young, elderly and those you would expect to need to be taken out."

Thus, it was not the Cyprus-based Griffins that were used, but a heavy-lift helicopter, the like of which are needed desperately in Iraq and Afghanistan.

At the moment, there are only two Chinooks in Iraq and a further six in Afghanistan, with another two promised. With only 16 of the RAF's 28-strong fleet of Chinooks currently "fit for purpose", the five being deployed in Lebanon now makes the whole of the fleet committed, bar one,

Yet even the numbers committed are not sufficient for operations in our combat areas, where many believe that we have too few troops and too little helicopter lift capacity. Should there be any further emergencies, the cupboard is effectively bare.

All this goes to show just how perilously marginal the strength of our armed forces has become, yet the mad European adventure continues unabated.

We must be very close to a reckoning.