They're not even in the game 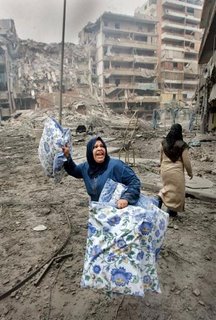 "Diplomatic impotence has rarely been as evident as it was in Rome yesterday".

So says the Telegraph editorial, retailing that the "so-called core group of advisers on Lebanon spent much of the morning in the Italian foreign ministry, debating whether to attach the adjective 'immediate' to its call for a ceasefire". Eventually, we are told, it decided against, for fear of ridicule.

Decades of "soft power" have rotted the brains of the collective. It has fallen for the belief that because "jaw-jaw" is better than "war-war", it is necessarily a substitute for it and that sweet reason and diplomacy can overcome the machinations of evil men.

As for little Tony, we are told that a YouGov survey shows that a majority of people thought he had performed badly and, says the self-important Telegraph, these findings "will increase pressure on Mr Blair to call for an immediate ceasefire when he meets President George W Bush in Washington tomorrow."

"Yo! And what then, Tony?" Bush might be tempted to say to a man who cannot even muster two additional helicopters for our forces in Afghanistan and is waiting for deliveries of US-built armoured vehicles before his troops can venture out of their Iraqi bases without getting slaughtered.

As for the EU, which seems to think that the answer to every problem is to throw other peoples' money at it, in the name of "humanitarian aid", it is rather apposite that, after its grand gesture of throwing yet more money at Lebanon, to top up its largesse to the people of Gaza, it is running short of funds.

But that doesn't stop the EU's "senior envoy" in Afghanistan, Francesc Vendrell, telling reporters in the capital, Kabul, that Nato "cannot fail in the south". "We are not going to tolerate any kind of haven for terrorist elements in Afghanistan," he says, "and on this we will stay here for as long as it takes to get this issue resolved."

Yeah, right, Senor Vendrell. And how many divisions have you got in southern Afghanistan?

And thus, as The Scotsman tells us, "The world condemns Israel as diplomacy fails again", the Israelis could be forgiven if they told the "world" to piss off. When these dismal excuses for the people that call themselves "leaders" can come up with something more than empty rhetoric, hand-wringing and vainglorious posturing - a few more helicopters for Afghanistan might be a good start - they might be worth listening to.

Until then, they're not even in the game.