What are we paying this man for? 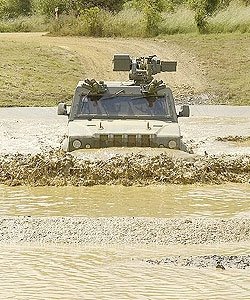 Yesterday, there was yet another defence debate in the Commons, unreported by the MSM, as most of them are.

There were several references to the "Snatch" Land Rover and I will publish a compilation of these over the weekend. But one interesting exchange caught my eye, between Conservative MP for Salisbury, Robert Key, and his fellow Conservative (for Congleton), Ann Winterton.

In his speech, Key – perfectly properly – applauds the work of the Royal Military Police, pointing out that they do a difficult and dangerous job. He goes on:

The strange thing is that, in battle, the RMP are always right out there at the front. They are in front of the armour and the artillery, staking out the forward route in their Land Rovers and so on. They are very lightly armoured, if at all, and they have no protection from mines, small arms or artillery. I know that that is being addressed. I have raised the matter before with the Minister of State. We know that there is a new stream of Panther vehicles coming to the Army later. However, what bothers me is that, in a parliamentary question, I asked who was going to get those vehicles first, and the answer was the training regiments. That is fine, but no mention was made of the RMP. I thought that we were talking about what was meant to be a front-line reconnaissance vehicle.

Ann Winterton responds to the mention of the Panthers, asking, "is my hon. Friend aware that the theatres and situations in which they can be used are limited? They were preferred to the RG-31s, which are much more flexible, have performed extremely well in Iraq and are used by the Canadians in Kandahar province."

Robert Key, in turn, tells Winterton that he is "well aware of both that and my hon. Friend's advocacy of the RG-31s," whence Winterton replies that, "They are cheaper and better." That provokes Key into retorting, "Well, fine, someone must have evaluated them along the line. In any event, those out in the front of the Royal Military Police should have these vehicles, or some equivalent."

Out of interest, I checked up on the number of articles I has posted which referred to the Panther Command and Liaison Vehicle. There have been eighteen, and I have posted the links below, in date order:

Anyone reading these cannot but come to the conclusion that there is something highly suspect about the way these "battlefield limousines", at £413,000 each, were procured. Yet Robert Key, described by some as a "cut-down version of Nick Soames" seems quite happy that "someone" did the evaluation, without seemingly worrying at all whether they got it right.

If that is the best our hon. Friend can manage, one seriously wonders what he is being paid for.