Berlin will have to decide 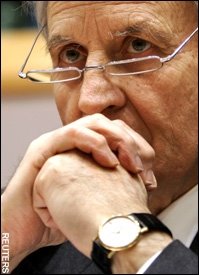 Ambrose Evans-Pritchard is always good value when he writes analytical pieces about the euro, and he is in his element today with a feature-length piece headed, "Blame game hots up over eurozone inflation fears".

His theme is the property boom and merger frenzy fuelled by cheap money, particularly in Spain and Ireland, where the "one size fits none" interest rate is fuelling a sizzling property boom from Saloniki to Dublin and a merger frenzy to match the final days of the tech bubble.

Furthermore, merger and acquisition deals in Europe have reached $365bn so far this year, up 73 percent from the first half of 2005, as companies soaked up the liquidity lake generously provided by the European Central Bank - with help of the Swiss, Swedes, and the Bank of Japan.

At the top of the dung heap is the ECB's chief, Frenchman Jean-Claude Trichet who is calling for "strong vigilance" to stop inflation lodging in the system, and signalling an interest rate rise to 3 percent in August by calling for a full meeting of governors, instead of the usual summer teleconference.

Italy in the line as a likely casualty of the ECB's policy, suggesting that it is in much the same mess as Argentina before the dollar peg collapsed. It faces a budget deficit of 4.6 percent of GDP this year, in the context of a public debt of 108 percent of GDP - rising fast.

Yet Charles Dumas, global strategist for Lombard Street Research, says that any attempt by Rome to regain competitiveness by swingeing austerity would be self-defeating: the economy would tip into recession, setting off a calamitous public debt spiral. "It can't be done," he says, predicting that Italy would be forced out of the system.

Ambrose concludes by noting that Germany can throw a lifeline to Italy - and later to Spain when that storm hits - if it is willing to tolerate enough inflation to let these countries grow gradually out of their dire predicaments. He concludes by asking: "Which is more precious for Germany? Price stability, or the survival of a monetary union it nurtured to heal the wounds of the last century?" Berlin, he says, will soon have to decide.