Where has he been all this time? 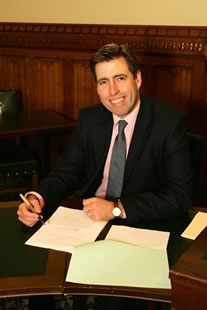 The Conservatives have a Shadow European Minister. Well, I suppose, if I had given it any thought I would have realized the likelihood of that. But I would never have worked out that his name was Graham Brady because I have never heard of the man.

I have now found out that he is the MP for Altrincham and Sale West and also that, according to his own website he is not too busy with statements or speeches or questions. He appears to have attacked the Lib-Dims for wanting to scrap grammar schools for which one can applaud him but has he realized that it is no longer Conservative policy to support excellence in school education or choice in any shape or form?

Another thing he does not seem to realize is that the European issue is NOT TO BE BROACHED BY ANY CONSERVATIVE POLITICIAN under pain of instant and painful execution. Well, to be fair, it is difficult to be Shadow European Minister and never broach the subject of Europe but Mr Brady seems to have managed so far.

The Sun thinks that this will infuriate the party leaders such as the Boy-King and William "We Must Be At The Heart of Europe" Hague. We may yet see that instant and painful execution. Something with boiling oil in it, as W. S. Gilbert said.