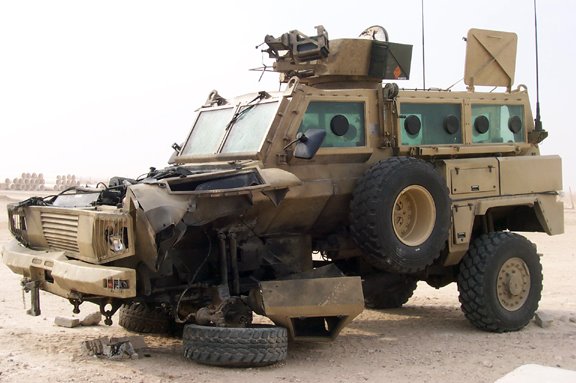 "Bombproof vehicles for troops in Iraq", says The Sunday Times this morning. More than 100 new heavily armoured patrol vehicles have been ordered by the government to protect British troops in Iraq against roadside bombs, writes Michael Smith.

The move, to be announced this week, follows the review ordered by Des Browne, the defence secretary. The latest vehicles will be upgraded versions of the armoured Cougars, says The Sunday Times, as used by US marines in Iraq. They will have additional armour, making them the most protected vehicles of their kind in the world.

Browne, a former chief secretary to the Treasury, asked his former boss Gordon Brown to provide the tens of millions of pounds to rush new vehicles to Iraq, a senior defence source said yesterday. Snatch Land Rovers, says the ST, cost about £50,000 apiece (actually, £60,000). The new vehicles cost about eight times as much but carry more troops. Ministry of Defence (MoD) officials, we are told, were ordered to bypass their complex procurement system and buy the best vehicle available.

From there, the Sunday Times gets a little muddled. From the price, it seems they are talking about the RG-31 – which is occasionally called the Cougar. But the paper says they are built in America by BAE Systems, which is not the case. The body shells are built in South Africa by a company owned by BAE Systems, and they are finished by General Dynamics in Canada.*

Nevertheless, the paper says they came closest to fulfilling the requirement for a protected vehicle, but despite surviving a number of bomb attacks in Iraq it was still deemed to have insufficient armour. It cites the MoD source saying that, "Browne accepted the arguments in favour of the Snatch Land Rover but ruled that the new range of roadside bombs meant that the situation had changed."

We understand that the MoD aims to have the "Cougars" in Iraq by the end of the year.

Interestingly, The Daily Telegraph carried a piece yesterday about blogs, noting that, "the most visited blogs are devoted to political gossip and comment. Once regarded as the home of amateur, 'wannabe' journalists, they are increasingly setting the political agenda."

Although we can't aspire to the heights of writing political gossip, this decision might just be an example of this phenomenon.

* Later information indicates this is wrong. The vehicles now seem to be a variant of the Cougar produced by Force Protection Inc.