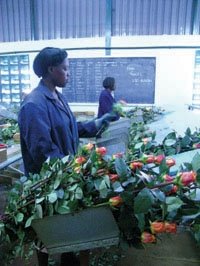 Despite the earnest guff we hear from all corners - and particularly the EU - about "saving Africa", once again we are hearing from The East African Standard in Nairobi a tale of woe about how EU rules are damaging the vital trade in fresh-cut flowers from Kenya.

Strangely, it was in August 2004 - almost two years to the day – when we first wrote about this issue. Then it was rules covering the "traceability" of export consignments, creating such a vast burden of red tape that the smaller growers could not cope with it.

Then, in August 2005, we wrote about how EU inspectors were failing to enforce their own rules on pesticide usage, to the detriment of local workers – in a situation where the "soft power" of the Union could have been a force for good.

And now the problem is EU Directive 2000/29/EC that demands flowers be subjected to 100 percent inspection at the EU entry point.

The complaint comes from Erastus Mureithi, chairman of the Kenya Flower Council, who is seeking government intervention in addressing what he says is a non-tariff trade barrier that threatens entry to U markets. "Although the directive is meant to ensure that member states do not allow the importation of harmful pests/diseases in to union, it is a non-tariff barrier since the pests are known to be present within the EU", he says.

What he wants is a relatively simple solution, that the EU should extend accreditation to Kenya Plant Health Inspectorate Service for flower inspections at the point of exit, similar to arrangements in place now fruits and vegetables, so that the inspections can be done in Kenya, saving the growers the costs of high-priced inspections in EU countries. 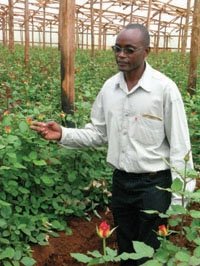 From this and previous posts one gets the impression that the greatest obstacle to Kenya's commercial development is the EU and, even if the inspection problem was solved (unlike the others), another is looming.

On the table at the moment are negotiations for the continuation of trade arrangements with the EU which currently exempt Kenyan horticultural produce from duty which would otherwise be imposed at a rate of 8 to 11 percent.

Freedom from duties is indeed vital to the Kenyan economy, where the horticulture sub-sector earned the country $400million, accounting for 14 percent of the country's total exports. Last year, the flower industry commanded 31 percent share of the EU market, providing 100,000 jobs directly and 1.5 million indirectly.

But the continuation depends on the country successfully negotiating a favourable Economic Partnership Agreement with the EU, which must be concluded by January 2008. Yet, again according to The East African Standard, Kenya could well become a victim of its own success.

The negotiations, which will gradually involve all members of the 79-state Africa, Caribbean and Pacific (ACP) Group is aimed at replacing the Cotonou Agreement. But the new arrangements will apply to what are known as the less-developed countries (LDCs) and such is Kenya's prosperity that it no longer qualifies as an LDC. It is now ranked as a "non-less-developed country".

On top of that, the country also faces WTO pressure to turn the Cotonou Agreement, which gives all ACP countries preferential access to the EU, into a reciprocal agreement, where subsidised EU exports can also enter ACP countries freely

With these complications comes uncertainty and Kenya Flower Council members are getting anxious about whether the negotiating deadline will be met. Erastus Mureithi warns that, if it is not, the consequences will be grave.

That is the reality of EU relations with Africa. Away from the "feel-good" crap of "making poverty history", it is a dog-eat-dog world, where countries like Kenya are being given few breaks and are having to fight for their economic survival, against the very organisations that so publicly claim to help them.

As always, it is the hypocrisy that stinks.