Through "toys" to the truth 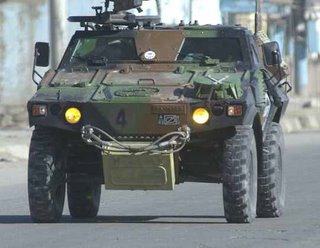 Although my otherwise staunchly supportive co-editor has little love for military "toys", even she recognises that study of the design, provision, and deployment of these highly functional machines gives an unparalleled insight into the military mind (such that it is) and the underlying political and strategic drivers.

In this context, a short press release from an obscure (to British audiences) French armoured vehicle manufacturer, assumes an enormous importance when fitted with the many other jigsaw pieces which we are trying to assemble to make a coherent picture.

The press release in question recounts how, on 19 October 2005, a French VBL armoured car patrolling the environs of Kabul was seriously damaged by an IED explosion. For the Americans in Baghdad and elsewhere, this is a common enough experience, and also to the British is southern Iraq.

But what is instructive is the French response. They immediately put their military research institute (la Section Technique de l’Armée de Terre) onto the problem and, within six months, a contract was given to the vehicle manufacturers, Panhard, to produce fifty armour kits to give lateral protection against IEDs. These are to be fitted in a crash programme to French VBLs in Afghanistan, from July through to December. 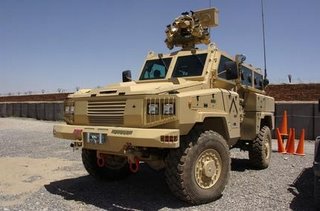 Compare and contrast this with the British response to the "Snatch" Land Rover controversy. Rather than an immediate technical response of the like we see from the French, we see, in effect, a two-pronged campaign to oppose calls for better equipment.

On the political front, we get the likes of Lord Drayson down-playing the merits of alternatives, like the RG-31 – arguing that they are "too big", they have the "wrong profile" and that they had "maintenance problems". On the other hand, we see a sustained media campaign – which spills over into the carefully regulated unofficial Army forum – to make out that the particular threat to British troops is of such a nature that improved equipment would not counter it. 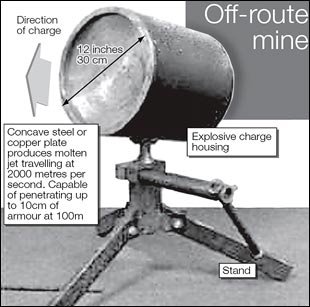 This is both clever and subtle. The "threat" – for which the Sunday Telegraph's Sean Rayment, carefully "fed" by the MoD, has fallen, hook line and sinker – is that the "real" problem is not inadequate Land Rovers but the so called "off-route" mine, crafted by those wicked Iranians. The suggestion is that these are such powerful weapons that no amount of additional protection would suffice and, therefore, we must rely on training and tactics. Rather conveniently, this strategy costs the Treasury little if anything by way of extra funds.

Taken at face value, this is plausible enough for some of the more gullible hacks to believe and, if the troops are not entirely happy about being forced to ride around in sub-standard kit, at least it is sufficient to convince them that the problem has been considered. 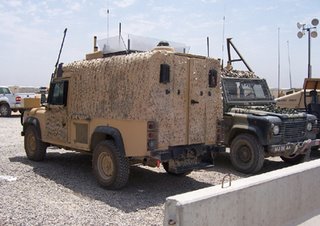 But the response – and previous events – do invite an alternative construction. In considering this, it is perhaps significant that, while we got a spate of bombings in May and June, there have been no recently reported casualties from Basra. To an extent, this is undoubtedly the result of a change in British tactics – Land Rovers patrols are now escorted front and rear by Warrior MICVs, and patrolling has been curtailed – but there is also a darker explanation.

Basically, the bombings of May-June could be construed as a warning, telling the Army – or the British government - to keep its nose out of affairs that were none of its business. So, as long as the Army does not interfere, it will be left alone and does not, therefore, need better equipment.

Strong support for this thesis comes not from the British press – which is hardly reporting on the affairs in southern Iraq – but from syndicated reports in the US media.

One such – picked up from Myrtle Beach online but carried in dozens if not hundreds of US newspapers – reports on how Iraqi Prime Minister Nouri al-Maliki's first major security initiative, a 30-day state of emergency intended to restore peace to Basra appears to have failed.

What is especially interesting is that the newspaper reports that "travel to Basra is difficult for Western reporters", so the newspaper group has "maintained daily contact with Basra residents, police officers and leaders throughout the month-long state of emergency to track its progress".

The reports thus come from residents, who say little has changed: Shiite militias and tribes still control the city's streets, political factions still fight for control of the city, and Shiite Muslim militias still threaten Sunni Muslims with death. Morgue officials report that the number of people killed in sectarian violence remains unchanged. Militias are still moving freely in the city and residents have given a steady chronicle of continued violence. 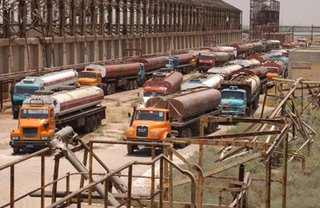 From a report in the Seattle Times, syndicated from the Los Angeles Times, we get another report that says of Basra, "This once-placid port city is looking a lot like the mob-ruled Chicago of the 1920s, an arena for settling scores between rival gangs, many with ties to the highest echelons of local and national political power."

We are told that, according to residents and officials, Basra's sudden political troubles and violence are rooted in a bloody competition for control of millions of dollars in smuggled oil. The report continues:

On the Shatt al Arab waterway and off the coast of the Persian Gulf, boats wait to receive Iraq's smuggled oil, the most visible sign of what many suspect are vast multinational criminal gangs selling subsidized and stolen petroleum products for a premium in Iran, Kuwait and the United Arab Emirates.

"Oil smuggling is one of the biggest issues in Basra," said Furat Shara, the local leader of the Supreme Council for Islamic Revolution in Iraq, a Shiite political party. "It is over the smuggling of oil that there is a conflict among the political parties."

One local official estimated the value of the smuggling trade at $4 billion a year, or about 10 percent of the country's gross domestic product.

Basra is almost free of the guerrilla warfare, car bombings and suicide bombings that characterize daily life in Baghdad, Baqoubah and cities in the Sunni Arab stretches of the country. But this Shiite-dominated southern city and its suburbs have descended into chaos and violence that threaten to unravel the region's modest progress.

According to local sources in Basra, smugglers have set up eight makeshift terminals along the coast to store the oil before smuggling it out of the country, a practice employed by Saddam Hussein during the 1990s to circumvent United Nations sanctions. Unemployed fishermen, struggling to make a living as their traditional livelihoods are destroyed by pollution and overfishing, run boats across the Persian Gulf, often to Iran or the United Arab Emirates.

A local schoolmaster, Mahmoud Salman Saadi, says, "Each political party is busy smuggling oil while we are busy looking for a quantity of gasoline to operate our small generators or cars." 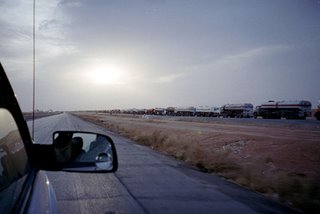 Thus, political leaders are more interested in retaining control of the oil-rich port city than in protecting it from militia and tribal violence. Residents complained about the Basra plan almost from its inception. The "state of emergency” seems to consist of nothing more than a few checkpoints, and the occasional high-speed, largely token British Army patrol. This leaves the report concludes, "not only is Basra falling apart, but the means to reverse the trend are disappearing. As conditions deteriorate, the educated middle classes — the people who know how to run the city — are leaving in droves."

Although nothing of this seems to be making its way into the British press – not least because the Army is tightly controlling media access to the city – it cannot be the case that the Army and the British government does not know what is going on. That it is not prepared to intervene speaks volumes of the attitude to the "occupation". We are just going through the motions, waiting for an opportunity to get out without losing too much "face", leaving the Iraqis to the rule of the gangster and the mob. But, as long as the government can continue muzzling an indifferent and largely ignorant British media, it can count on no one knowing until its is too late.

Meanwhile, our troops will continue to ride around in "Snatch" Land Rovers and the propaganda game will continue. And, as long as they do, we will know that the British government has no real intention of living up to its responsibilities in southern Iraq. Thus do we see that, through the study of "toys", we get to the truth.