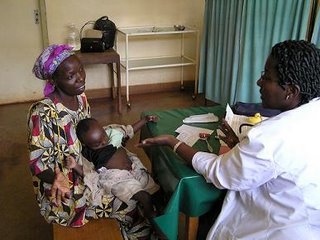 The Business newspaper tells us that G8 leaders have become embroiled in a dispute over competing plans for funding cheap drugs to the Third World. It seems that disagreements over how the programme is to be financed have "dashed hopes" that agreement would be reached at their summit next weekend in St Petersburg.

This was all started by Chirac, with a plan to tax airline tickets in order to provide a fund to buy pharmaceuticals for African States, with special reference to AIDS. France has already imposed a €1 charge on economy class seats and €10 on business class flights for its fund to fight Aids in Africa, and said it has 13 countries willing to sign up.

Now the Italians have weighed in with a rival scheme, which would guarantee subsidies of between $800m and $6bn to pharmaceutical companies for developing cheap vaccines, particularly for pneumonia and meningitis, which kill millions in the Third World. Few African countries can afford to buy these kinds of vaccines.

What is sad about this is that anyone can even think of giving house room to these megalomaniac schemes, especially anything devised by Chirac. No only is the man a crook – a liar and a thief who would have been locked up long ago but for the fact of his presidential immunity – "top down" schemes like his rarely work in Africa. By the time local crooks have siphoned off their cuts, and different countries have imposed their own taxes, there is often little benefit to ordinary Africans.

Now compare and contrast with the scheme highlighted in the Booker column this week.

A small charity called Intercare, based in Leicester, has for 30 years been putting large quantities of drugs surplus to requirements to use in Africa. Thanks to a nationwide network of volunteers, it collects medicines from GPs, which are rigorously inspected by a team of retired NHS professionals - doctors, nurses and pharmacists - and then supplied to 94 clinics in seven African countries.

This is the sort of initiative that does work. It cuts out the middle-men, by-passes the corruption because no money, no government agencies and no NGOs are involved, and ensures that real aid reaches the people who most desperately need it.

That was the situation, but it was to reckon without the mindless intervention of the bureaucrats of our very own Environment Agency. According to their bizarre interpretation of EU waste rules, they have decided that these life-saving medicines are "waste" and must be buried in landfill rather than put to use in Africa.

The drugs are only sent out, to order, when they are in date and in perfect condition, and the operation is approved by the World Health Organisation. It provides 2.5 million Africans in remote rural areas with access to treatment they could not otherwise afford.

However, not only are these cretins in the Environment Agency seeking to put a stop to this work, they are considering prosecuting Intercare for breach of EU waste rules, and the directors have been summoned to an interview under the Police and Criminal Evidence Act.

This very much seems to be the way of things at the moment: seek out those imaginative schemes that actually work – and stop them. Meanwhile, hand the problem over to megalomaniac crooks like Chirac, to enable him to grandstand on the world stage with a scheme that is not only doomed to failure, but will likely fuel the very sort of corruption that has kept Africa on its knees.

The worst of it is that the Booker story is tucked in his ghetto in the Sunday Telegraph, where it will likely be ignored by the great and the good, while the Chiracs of this world grab the limelight with their crooked schemes.