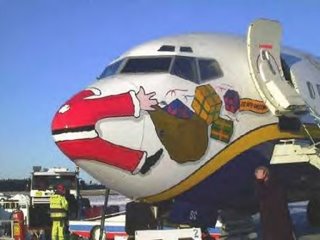 The beneficent EU is at it again, according to the Guardian and several others, that paper telling us that, "EU proposes crackdown on airlines' hidden charges".

Thus will the EU commission force "EU airlines" (what they?) to publish the full cost of flights, ending the practice of concealing hidden extras behind "cheap" offers. It will also ban airlines from charging passengers more in one country than another.

Jacques "Wheel" Barrot, the EU transport commissioner, is to propose that airlines publicise full fares, including taxes, charges and booking and credit card fees on their websites and in adverts and will accuse flag carriers and low-cost airlines of concealing their real prices.

Now, I now this is a family blog, but there really is only one sensible response to that – "piss off". There are no "hidden extras". There is only one price that you pay, when you click that final button on the internet page where it tells you exactly what the ticket is going to cost you. You pay that, and no more.

Whether airlines use "come hither" adverts is entirely up to them. We are all adults and anyone with a brain can read the small print on the ads and then see for themselves what it is going to cost them. And, if you don't like the price, don't fly, or find a cheaper carrier - if you can.

Speaking personally, I have pay several times more on GNER's wonderful train from Wakefield to London – even cheap rate – than it would cost me to travel to virtually any capital in Europe. And, having gone down to London yesterday, you can for your money suffer a journey from hell. I had train after train cancelled or delayed, arriving two hours later than planned and, as a final insult, found the tube system shut down.

No, that wasn't the final insult. The late train back to Wakefield is now discontinued, so I had to get off short and pay an exorbitant taxi fare to my station of departure, at a price that could have got me to New York and back. Don't talk to me about "hidden extras"!

Perhaps "piss off" is too mild but, short of expressing my real feelings, all one can say to the EU is: get a life!

The photograph, incidentally, is the best I could manage at 3 am after a shit day. It should be Jacques Barrot, not Santa, impaled on the nose. Perhaps Anoneumouse might be able to come up with something.