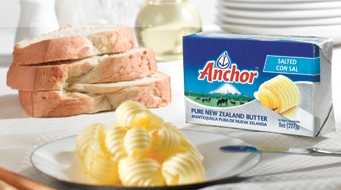 It was over sticking points like New Zealand’s privileged access to the UK market, and its right to continue selling commodities like butter, that the British negotiations to join the Common Market, back in the '60s, foundered. And it was from the interminable negotiations over butter quotas that Ted Heath acquired the sobriquet "the Grocer" from Private Eye.

However, at the moment, the New Zealand media is howling in outrage at the unilateral decision by the EU commission to suspend all New Zealand butter imports to the European Union.

The Commission has halted the butter trade, worth more than $200 million a year, while it considers an ECJ decision that invalidates parts of New Zealand's market access agreement to Europe, after it decided the Commission made a mistake in drafting its dairy trade rules.

New Zealand dairy giant is, Fonterra, has protested against the decision, saying it is ridiculous, with its spokesman, Mr van der Heyden arguing that the court ruling implies that the EC has an obligation to ensure business continues uninterrupted and says nothing about stopping trade.

The New Zealand trade minister Phil Goff says the move is "inappropriate" and has written to the EU agriculture commissioner requesting the suspension be lifted. He says the decision breaches the EU's World Trade Organisation obligations.

Currently, New Zealand sends 28 percent of all its butter to the European Union, much of it to Britain, yet the case was initiated by a German dairy trader who challenged the New Zealand butter quota.

Significantly, throughout the war and the very worst of the U-boat campaign, Germany never managed to sever our trading links with New Zealand but now, sixty years later without even firing a shot, it has achieved that, courtesy of the European Union.

Back then, of course, our trading links – and our more general relations – with the Commonwealth really mattered. But, despite this serious blow to the New Zealand economy, and not a squawk of protest from the British government, and no mention of this in our media.