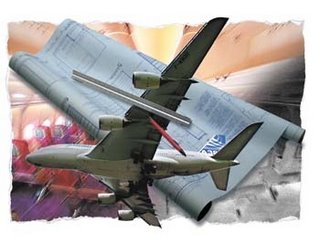 In today's edition of The Business, on the eve of the Farnborough Air Show, you will find a 2,000-word update on Airbus, chronicling just quite how low the fortunes of this company have sunk.

This is well worth a read, and pointless me regurgitating here. But what it highly entertaining is the analysis of the company's decision to build the A380 "superjumbo". Says the paper:

The ambitious A380 super-jumbo, with a baseline 555 seats, was supposed to fill in the final gap in its range, leapfrogging Boeing’s venerable B747 jumbo, the plane that pioneered long-haul travel for the masses 30 years ago.

But with the A380, Airbus was building the wrong plane. Since the design of the A380 was approved, half a decade ago, the global aviation industry had entered a new phase. Thanks to improved technology, airlines no longer saw the need for giant planes flying long distances. And as hub airports become more crowded, and passenger numbers grow, customers can see the obvious advantage of flying "point-to-point" from regional airports close to home, to regional airports close to their destination.

This had been obvious to Boeing's crystal-gazers years ago. The Chicago-based aircraft maker began work on an all-new widebody twin-jet, offering from 250 to 300 seats, to capture this market. Its B787 Dreamliner, using composite materials and state-of-the-art technologies, will provide big fuel economies at a time of soaring oil prices, and will fit the shape of passenger demand when it comes into service in 2008. The proof is in the sales figures: airlines have ordered more than 350 Dreamliners, enough to offset the plane’s huge development costs.

Now, compare and contrast that analysis with this piece written in January last year (2005) at the time of the A380 launch:

For all that, the A380 is an aircraft that has never left the runway and its first flight is not due to take place until this spring. Commercial service is expected in 2006.

Interestingly, compared with Boeing's alternative, the 7E7 "Dreamliner", there is another "old Europe" aspect to this project. Boeing is going for a smaller aircraft, capable of servicing regional airports, transporting people directly from place to place. The idea is to give passengers a greater choice of starting points, routes and destinations, enabling them to avoid the inconvenience of travelling to the congested, high density "hubs".

Airbus, on the other hand, is going for massive centralisation, putting even more pressure on the central hubs, as its operating carriers will be forced to increase passenger traffic to meet their costs. That rather epitomises the very nature of "old Europe" – an inflexible, centralising construct, divorced from the needs of the people.

As well as the hardware, therefore, we are also seeing an ideological battle and competition between two opposing commercial concepts. My money is on the New World.

The source of that prescient piece? Why, little ol' EU Referendum of course. We mustn't do this too often, but I think we're entitled to feel a little bit smug.