How will they communicate? 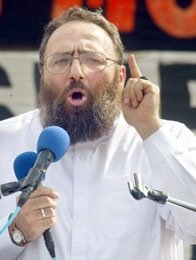 In today’s Evening Standard, a newspaper that is, alas, incapable of understanding the importance of the web, underneath the large spread about Hanan Fostok demanding that the RAF or the Royal Navy (she is not fussy) bring out her husband, Omar Bakri, from Lebanon, there is a delightful little piece that may be of interest to our readers.

First, let me remind all of them who Omar Bakri is. He is the one and only “preacher of hate” who has left this country, not because he was deported as the government and the Home Office kept huffing and puffing about, but because he was scared and he ran. He ran all the way to Lebanon, where he was arrested but, apparently, released.

Bakri was born in Syria and is wanted by the government of that country for plotting the government’s overthrow in 1970. This is a dispute I am happy to sit out except to note that Bakri must be worried about all sorts of things – Israeli bombs, Israeli soldiers, Lebanese enemies and, last but very much not least, another Syrian invasion.

The man was given asylum here and both he and his family lived entirely on benefits. In fact, his family still does so. I am not even sure that there is only one family. So he had no job while he was here. What did he do with his time? As the leader article in the Standard puts it quite fairly:

“This is the man who blamed the British people for the terrorist outrages of 7 July last year, claiming that murderous attacks on innocent civilians were a justified response to an elected government’s foreign policy. He also praised the hijackers who inflicted the carnage of 9/11. As spiritual leader of the extremist Al-Muhajiroun group he was responsible for stirring up hatred and disseminating lies with the power to spur on young men to commit further terrorist acts.”

Bakri, in short, is one of the exponents of the most violent and extreme Islamism. Just the chap our boys should be risking their lives to save.

The fun piece underneath the long and self-righteous whinge by Mrs Bakri (apparently people treat her and her family as that of a terrorist) there is a lovely little article, entitled “Foreign Office at odds with Downing Street over Israel bomb blitz”.

That the Foreign Office is frequently at odds with Downing Street is nothing new; that it (snigger, snigger) considers its own views to be of importance is a given; that it is persistently Europhile, anti-Anglosphere, anti-American, pro-terrorist and anti-Israeli is so well known as to induce nothing but complete boredom. The question I have is how will they communicate their displeasure with the Prime Minister of this country and the behaviour of another country, namely Israel? Not by satellite phone surely?

The whole story reminds me of that glorious episode in “Yes Prime Minister”, where Jim Hacker stands up to the Foreign Office and, with the help of his old university friend, the Israeli Ambassador, wins. 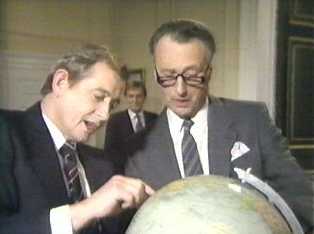 Who can forget the ending of the episode when Hacker, having done what he was told not to do by the Foreign Office and Sir Humphrey, that is, sent an airborne division as a gesture of good will to St George’s Island, pretends that he did it because of a warning from the weaselly FCO chap, Luke, that had been carefully hidden somewhere in a 128 page report.

He then decides to reward Luke for his “perspicacity” by making him Ambassador to Tel Aviv, so he can explain to the Israelis why Britain always votes against them in the UN (even when specifically instructed by the Prime Minister not to do so).

Luke is appalled. After all the Israelis know that he is on the Arabs’ side. “I thought you were on our side,” – Hacker tells him silkily.

I don’t know whether Tony Blair ever watches “Yes Prime Minister” but I imagine neither he nor the Israelis will lose any sleep over the FCO’s huffing and puffing. Kim Howells, the junior minister, who had been told that the Foreign Office “had repeatedly urged Israel to act proportionately”, is going to the region today.

We are back to the same question. How will he communicate with London? The satellite phones have been stolen and even the EU is unlikely to have reduced roaming charges in Lebanon, though probably they have done so in Israel. Perhaps, some Israeli soldier will lend him a satellite phone and, I hope, demand it back as soon as Mr Howells has finished his conversation.