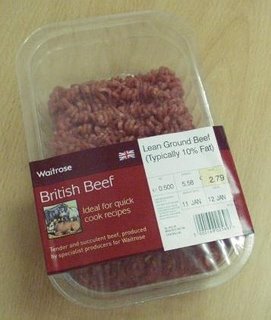 One of the things that drags the anti-EU argument down into the gutter, and provides ammunition for the 'philes, with which to denigrate the whole Eurosceptic movement, is the prevalence of that malign genre, the "Euromyth".

Descending from the stratospheric heights of high politics, the Euro-army and the rest, therefore, a story in today’s edition of the Scotsman caught my eye.

Headed, "Mince for the chop under EU hygiene rules", the newspaper tells the sorry tale of how butchers in the Capital "have hit out at a new European ruling which puts Scotland's traditional meal of mince and tatties under threat."

Scots butchers, the paper continues, have made mince from beef hung for up to three weeks for generations. But now the European Commission has ruled that the product can only be made from beef within six days of an animal being slaughtered, for hygiene reasons.

It quotes Joe Findlay, owner of Findlay's of Portobello, saying: "It's pretty unfair really for butchers who have been doing it for a great number of years without doing any harm to anyone. The EU keep bringing things up and we have no choice but to go ahead and do it. I think they're getting their knickers in a twist."

Then, to give the story gravitas, the paper moves on to Alistair Donaldson, "executive director of the Scottish Association of Meat Wholesalers." He is cited as saying: "There are microbiological standards for mince and, if these tests are producing mince to a satisfactory standard, then the age of the meat should not have a bearing."

Then finally, we get McGowan, industry development manager for Quality Meat Scotland, who says: "Unfortunately, Scotland has been caught up in this and it will have a major impact on mince, one of the nation's favourite meals."

In the ordinary course of events, such a story would get picked up and repeated uncritically, in different newspapers and by various Eurosceptic groups as another example of the interfering EU.

But, before we add to the weight of condemnation, what are these "new" rules?

Actually, they are contained in Regulation (EC) No 853/2004 of the European Parliament and of the Council of 29 April 2004 laying down specific hygiene rules for food of animal origin.

The regulation came into force on 1 January this year as part of a wide-ranging package of EU hygiene legislation and, indeed it does require mince to be made from the fresh meat within no more than six days after slaughter of the animals, although there are longer periods allowed if the meat has been vacuum packed or frozen.

So far, so good, even if the story now seems a little dated, with the regulation coming into force in January. But it does not end there. The relevant part of Regulation 853/2004 is in fact a copy-out of Council Directive 94/65/EC of 14 December 1994 laying down the requirements for the production and placing on the market of minced meat and meat preparations. And there, in Article 3.2(a)(ii) is exactly the same six-day requirement. Far from being "new", these rules are actually over ten years old.

But still it does not stop there. In the original 1994 Directive, and repeated with a slight variation in the 2004 Regulation, is an exemption, currently applying to "the direct supply, by the producer, of small quantities of primary products to the final consumer or to local retail establishments directly supplying the final consumer".

In other words, there is nothing whatsoever to stop a butcher making mince in his (or her) shop for direct sale to the customer, from meat hung for as many weeks as is thought fit. The Scotsman has got the story completely wrong, making it another of those classic "Euromyths". Scotland's "traditional meal of mince and tatties" is perfectly safe.

And to think the newspaper actually paid someone to write this garbage.