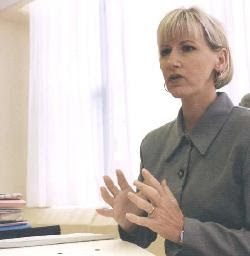 It is some time since we have written about the fragrant Commissar, Margot Wallström and her battle for popularity – for herself and the institution she serves and receives a handsome income from, the European Union.

Our readers will recall that in pursuit of said popularity and a cuddly image she was the first Commissar to start her own blog. Unfortunately, it is so dull (whether because it is written by a committee or because she manages to excise anything of any interest from it is unclear) that our original intention to shadow it was abandoned. Neither my colleague nor I could read through that bilge regularly every week.

Interestingly, this seems to apply to others as well. At the beginning of the Margot blog, I used to get e-mails from our readers, encouraging me to go in there and do my worst with the fragrant Commissar. It is some time since I have had one of those, which makes me wonder how many other people have given up reading all that fluffy bunny fragrant stuff.

The comments on individual blogs are few even though she posts only about once a week and some of these are clearly planted to tell everyone how wonderful it is to hear Margot's story. But even the various minions in the Commission and the European Parliament who had been urged to become involved in the debate that used to rage in the comments section, have largely given up, as have most eurosceptics who used to have a great deal of fun attacking the fragrant Margot.

The last of those statements ought to make the lady truly happy. She is not attacked as much as she used to be and there are no more furious arguments. Everything is going her way. Right? Wrong.

Another thing our readers might recall is the fragrant Margot's tendency to travel round all sorts of exciting and beautiful places, often with tropical beaches, no doubt spreading the good word about the European Union. Every now and then somebody would point out to her that those lovely holidays …. oops fact-finding tours …. was not quite what she was receiving her handsome salary for.

Obviously, she has taken some of it to heart. She has spent a short time in Scotland where she and the egregious Jack Mcconnell answered questions from students in Stevenson College. (No, she does not explain where it is, all of Scotland, presumably, merging into one in her mind.)

Apparently, the students came armed with all sorts of questions but we are not told the details of that or of the answers they received. One lad, obviously with a great future, complained bitterly about the fact that the media reported only bad news about the youth of today. What about some good news, he asked, though again, we are not given examples.

The obvious answer is that the media reports what it thinks is news. It is frequently wrong about that but that is the thinking. Ordinary, every day things are not news, be they good or bad. As it happens, we get plenty of stories about young people which are not particularly negative but, in the final analysis, very little young people do is of interest to anyone outside their own family. Come to think of it, very little older people do is of interest to anyone except their friends and relations. Why waste time reporting it?

That is not the view the fragrant Margot took. She used this rather disingenuous question to bewail the fact that the media is interested only in bad news.

“The background is of course that good news rarely make headlines and that the media prefers to report on conflicts, problems and confrontation to things that go well.”

As one person pointed out in the comments section, the media does not report the various conflicts either. How much do we actually know about what is going on in DR Congo, for instance? Even in the Middle East, unless Israel or the United States is involved directly, we hear little in the media about the superabundance of bad news.

What bothers the fragrant Margot, needless to say, is the fact that the media does not report good news about the EU. She seems convinced despite all evidence that all she needs to do to bring the increasingly more disenchanted Europeans round to supporting the European project is to continue with the famous charm offensive. Just tell them we have achieved this, that and the other and they will never notice the truth.

Let's face it, compared to the "founding fathers" of the European Union, the fragrant Margot and her various colleagues are not even also rans. Monnet would not have bothered with charm offensives. Create the structures, integrate the national ones and the hearts and minds will follow. LBJ, of course, put it a lot more crudely than that.

Nor has the fragrant Margot clearly understood Spinelli's intentions when he tried to promote the idea of a "European identity". The problem with Margot (and her colleagues) is that they have no clear idea what a European identity might be apart from the fluffy bunny stuff that she sometimes manages to produce.

They are, one and all, faced with the insoluble contradictions of their position. On the one hand, the European Union is there to promote European values and culture; on the other hand those values and culture have been at their strongest in the many, small and large, units of statehood that promoted different ideas. Entrenching European ideas by negating the basis on which they existed is something of a cul-de-sac, intellectually speaking.

On the one hand, the EU is an absolutely essential body because of all the nasty things that Europeans have done to each other since time immemorial but, in particular, in the twentieth century (though it is best not to enquire too deeply into what happened or we might find that a supranational government is not the solution); on the other hand the EU is absolutely essential because it is the political personification of all the wonderful things that Europe is (those lists never include any of the nasty stuff, which just kind of happened).

Faced with the need to perform some very clever mental contortions all Margot can do is perform her fluffy bunny act and talk about such wonderful achievements as the reduction of roaming charges across European borders. Never mind the fact that telephone companies are gradually reducing roaming charges, anyway, in order to make their packages more attractive; never mind the fact that many of them will now use the excuse of EU interference to put up domestic charges; this is good news week for the EU.