Another great idea from the Fluffy Fragrant Commissar 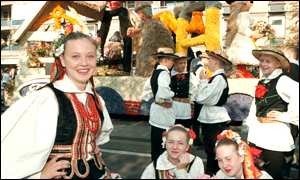 This is not a very new idea but has now had the official imprimatur of the Fluffy Fragrant Margot, so we must consider it to be on its way. Yes, from the team that has brought you “D for Dialogue, Deafness and Dysfunctionality” we now have: a Eurovision style song contest in all the member states next year to coincide with the 50th anniversary of the Treaty of Rome.

“Communications Commissioner Margot Wallström believes that a pan-European song contest would “show the EU can dance”, as well as highlighting “the benefits that European integration has brought to its citizens”.”

The title of this great festival of highly entertaining banality will be “Europe Singing and Giving”. I wonder if the songs will have words to match that festival title. Cole Porter it ain’t.

Apart from the inevitable jokes and comparisons with the existing Eurovision Song Contest, there is the problem voiced by a Czech member of the government, who pointed out rather sourly that all of this will seem very familiar to the new member states who have been there before:

“There were all kinds of events celebrating everything, and there was one called the Spartakiada, which consisted of singing and dancing for the masses.”

Well, I hate raining on the Czech government member’s parade, what with them being our allies, partners and fellow members these days but I feel I must point out that had he or his colleagues read the Consolidated Treaties before signing up for membership, their surprise might have been avoided.

As long ago as the Treaty of Maastricht there was an Article 128, which said:

“The Community shall contribute to the flowering of cultures in the member states while respecting their national and regional diversities and at the same time bringing the common cultural heritage to the fore.”

Our Czech friend and, indeed, all our East European and Baltic friends may remember something about culture in all the Soviet states and the East European satellites being “national in form and socialist in content”.