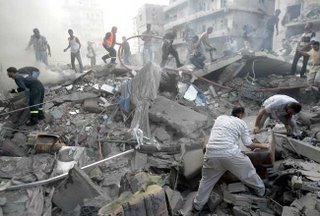 I think you would struggle to get a better summing up of the situation in the Middle East than that provided by the Guardian this morning.

Under the headline, "There is no ceasefire. There will not be any ceasefire?", it reports that an international drive for a ceasefire in Lebanon halted yesterday amid sharp differences at the UN security council, Israel's rejection of any truce in the near future and a Hezbollah warning that it would oppose the deployment of a multinational security force.

Condoleezza Rice said she was convinced a sustainable ceasefire could be achieved at the security council this week but Israel signalled dissent hours after she left Jerusalem for Washington. Olmert shrugged off international pressure, saying, "The fighting continues."

Then, late last night Israel's cabinet approved a wider ground offensive after military chiefs pressed for an expansion of their operations to take forces several miles deeper into Lebanon than their current border missions.

On the diplomatic front, Israel, backed by the US, is insisting that the multinational force be put in place before it halts its operations. France and other countries which could contribute to a proposed 20,000-strong force are determined that a ceasefire and the framework for a political agreement between Israel and Lebanon must precede deployment. 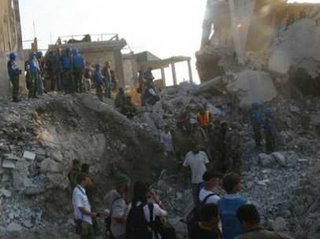 If there was ever of picture of a total stalemate, that it is, but the one thing the MSM does not want to entertain is any suggestion that the Qana incident was staged by Hezbollah. However, Israel Insider is but one of hundreds of sites that are expressing well-founded doubts about whether the whole affair was deliberately set up. If this is ever substantiated, it will destroy Hezbollah more certainly than the IDF.

From our stance, what is especially interesting is that sometime after dawn a call went hour to journalists and rescue workers to come to the scene. And come they did, in droves. Says Israel Insider, while Hezbollah and its apologists have been claiming that civilians could not freely flee the scene due to Israeli destruction of bridges and roads, the journalists and rescue teams from nearby Tyre had no problem getting there.

That certainly seems to have applied to our mystery man, "Green Helmet", as the Yahoo site has him in Tyre on the Wednesday (pictured above left), acting as part of a fire crew. This is captured by AP /Lefteris Pitarakis, in a photograph with the following caption:

People gather at the rubble of a destroyed building minutes after an Israeli airstrike on the centre of the coastal city of Tyre, Lebanon, on Wednesday.

We also have another photograph of him in Qana (above right), also from the Yahoo site, this time in the crater caused, we are told, by the Israeli bomb. There, once again, he is at the centre of the action, his authority to be there undisputed. 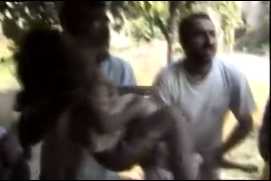 He was also depicted on the BBC Newsnight together with "White Tee-shirt". At the beginning of a sequence, the body of the girl in our first post on this issue is handed to "White Tee-shirt", whence "Green Helmet" appears from out of shot and grabs the body preparatory to carting it off. What again seems to be evident again is the undisputed authority of the man. He calls the shots and no one argues. 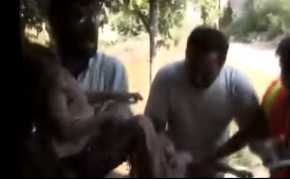 Nevertheless, there seems a certain discrepancy in this sequence as it purports to show the body being removed from the collapsed building. "Green Helmet" is all kitted up and we see him photographed in all manner of poses, carrying her. But we also see him without his helmet and kit, putting her in the ambulance. 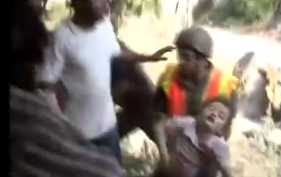 It stretches belief to breaking point to argue that, on his way to the ambulance, he took off his helmet, his fluorescent waistcoat and his flack jacket just in order to pose for the cameras putting the body in the wagon – especially as we have the body being placed on the "guerney" – which means the scenes are totally inconsistent. Beyond speculation, we don't have the answer to these inconsistencies, but they cannot be dismissed lightly or ignored.

We remain convinced that knowing the identity of "Green Helmet" and something about him could help significantly in understanding what went on at Qana.

Meanwhile, on an entirely domestic note, to our amazement, we did over 115,000 hits yesterday, as against a normal average of just under 2,000. Welcome though they were, we would have preferred a happier note on which to sail past our million hits mark, some two months earlier than expected. However, as long as you keep reading us, we will keep posting. We thank all our readers, and look forward to our next million hits.