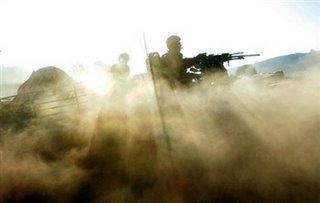 I'm actually old enough to remember the 1967 Six Day War, and was young enough then to be enthralled by the drama, and by the sheer panache of the "plucky" Israelis as they prevailed against all the odds.

Some years later, I was able to tour the battlefields, in particular walking up the steep, winding road to the Golan Heights, seeing the burnt-out T34s and marvelling how the IDF ever succeeded in terrain which, if held by a determined foe, would have been impregnable.

Thus it is, as the summer heat grinds on, the news is dominated by yet another Israeli war, driving out the preoccupations of the EU and reminding us all how petty and irrelevant that organisation really is.

How can we possibly get excited, for instance, about news of the latest effects of the EU's recycling tax and, as for the collapse of the WTO Doha round, the sheer predictability of the failure is matched only by the tedium induced by the outcome.

But, as the news pours in from the Middle East, how different things are from those heady days of 1967. Two weeks into the battle, The Times tells us, and the IDF has had its worst day yet, with at least nine soldiers killed in fighting around the Lebanese border town of Bint Jbeil. 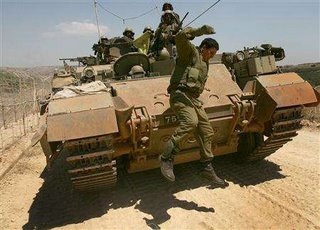 We are looking at is one of the finest and best-equipped armies in the world stalled by a group of Hezbollah terrorists, suffering significant casualties and loss of vehicles. Significantly, with the local Haaretz newspaper asking, "Has the army failed?", Amir Rappaport, the Ma'ariv's military analyst, is writing that intelligence was indicating that the roads had been mined with bombs that looked like rocks and contained hundreds of pounds of explosives. Israeli soldiers had been shocked by the strength of Hezbollah's resistance, and said that the biggest threat comes from Hezbollah's anti-tank landmines and missiles.

How relevant that is to the pieces we have been writing on this blog of late, but it may take some time before the lessons are fully understood. 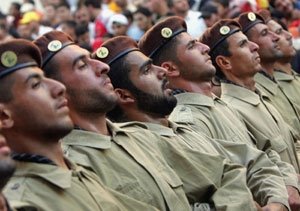 We appear to have reached the limits of technology, tactics and firepower which have underwritten the might and the standing of the Western powers. The greatest military force on earth has so far been unable to prevail in Iraq, and now probably the most capable is on the brink of being humiliated – both by low-tech weapons in the hands of ruthless and obsessive terrorists.

In all probability, the experience or Iraq and now northern Lebanon – not forgetting Afghanistan, where the might of the Soviet Army has already been seen off – will be seen as a turning point. Pure military force, and the diplomatic clout that comes with it, is no longer enough. The nature of power and how it is projected will have to be re-examined.

As we do this, I suspect, it will dawn on us that we are breaking away from a world dominated by ideas forged during and between the last two World Wars, and the post-war settlements that arose from them. This are settlements of which the EU, the United Nations, the WTO and all the great tranzie organisations were a central part.

They, like the military thinking and technology which has dominated the 20th Century, are no longer providing the answers. We need new paradigms, new thinking and new solutions. None of the tranzies, and especially the European Union, will be part of those solutions.