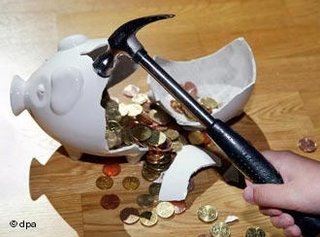 The Commission has decided to suspend disciplinary proceedings against Germany for consistently breaching the EU budget rules that were put in at her own request.

"It said that Berlin was on course to bring its budget deficit - the gap between its revenues and spending - back within EU limits next year.

Europe's biggest economy has broken EU budget rules for the past four years. It's something which has proved embarrassing for Germany, and infuriating for Brussels."

We are told by the BBC that various reforms (such as the proposal to raise VAT from 16 per cent to 19 per cent, making it the highest in the EU) will deal with the problem. That we shall see. But, in the circumstances, the Commission will not be able to discipline any smaller country either.