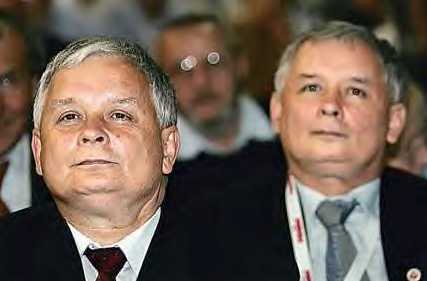 Once again we are indebted to our readers, one of whom has called our attention to the political shenanigans in Poland. On the other hand, we did predict just over a month ago that the government of that country is unlikely to beat any records for longevity.

Later last Friday, the former Prime Minister, Kaziemirz Marcienkiewicz tendered his resignation which meant that, according to the Polish constitution, he had tendered the resignation of the entire cabinet.

The resignation may not be surprising to people who have been following the in-fighting that has gone on in the short-lived cabinet and knew about Mr Marcienkiewicz’s unhappiness about the coalition with the Self-Defence Party and the Catholic League of Polish Families. On the other hand, Prime Minister Marcienkiewicz was and still is the most popular politician in Poland.

There is another aspect to the whole problem. At the time of the last election, when the Law and Justice Party came out ahead of the others, its leader, Jaroslaw Kaczynski made no particular secret of the fact that that he would have liked to become Prime Minister but stood aside for Marcienkiewicz, in order to enable his twin brother, Lech, becoming President.

Having accomplished that aim, the twins, former child film stars, have moved on to the second part of the plan. Jaroslaw is now Prime Minister, though we are still waiting for the final list of cabinet members.

The new Prime Minister has wasted no time in demanding an apology from the German left-wing newspaper, Die Tageszeitung, whose hitherto low circulation is, undoubtedly, growing by leaps and bounds.

Furthermore, he has demanded that the German government do something about it, as insulting a head of state is a crime. Given that the Foreign Minister, Anna Fotyga, had compared the article (a somewhat unfunny and offensive piece, in the tradition, I understand, of the newspaper’s columnists) with publications by Der Stürmer, there is a certain irony in the Polish Prime Minister’s statements.

“Poland's ambassador to Germany, Andrzej Byrt, has lashed out at his own government, branding the reaction to the satirical article "exaggerated" and condemning the president's withdrawal from the tripartite summit.”

In Germany there are comparisons being made with the Danish cartoon row, though to be fair, there have been no Poles demonstrating anywhere, demanding the beheading of German journalists and of Chancellor Angela Merkel. (Probably too busy working as builders, plumbers and carpenters in Western Europe.)

Meanwhile, this blog, with the help of its readers on the Continent, will try to follow the astonishing political developments in that country.