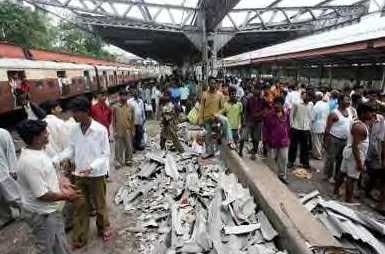 If one were to follow the news on the electronic media of this country one would assume that there were only two stories of any importance in the world: the NatWest bankers and the potential witness, whose body was found in Waltham Forest; and the arrest of Lord Levy in connection with the cash for honours saga. Curiously enough, the rest of the world does not share this assumption. Even the NatWest saga seems to have been ignored or relegated a long way down by American newspapers and websites.

However, we in our - well, one can call it an obsession - have also passed on the two biggest stories, which is not to say we have not been interested, appalled and even frightened. The two stories are, of course, the Middle East descending into open war in Gaza and Lebanon, where Israel has started military operations to rescue its soldiers; and the horrific series of blasts in Bombay (referred to by many though not the inhabitants as Mumbai).

At present there is nothing we can say, beyond extending our sympathies to all in that stricken city. But we shall be watching what if anything will the EU and other tranzis do about both those developments. One can guess that it will be largely incompetent in India and messy in the Middle East. After all, it does not matter what Hamas or Hezbollah do - the line followed by the EU, the UN and various NGOs will always be to criticize Israel. I predict more of the same.